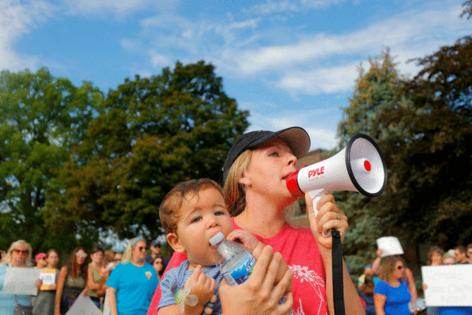 DETROIT — Michiganders support the government requiring students to be vaccinated against COVID-19 as soon as federal regulators approve inoculation for all age groups, according to the findings of a new poll commissioned by the Detroit Regional Chamber.

A majority also believe the state, local government officials or school districts should make decisions on masking in schools, as opposed to parents. However, most parents with school-aged children who were surveyed — more than a third of those polled — opposed any vaccination mandate for students.

Voters are deeply divided on the concept of vaccine mandates, with a slim majority generally opposing such a requirement. But most do support the requirement to wear masks in public places, according to the survey.

"Those who are opposed are really opposed," said Sandy Baruah, president and chief executive officer of the chamber.

"The passion on that side of the issue is, I would say, whiter and hotter than the other side. The passions burn deep on that," Baruah said.

More broadly, the survey found that the impact of the pandemic and related regulations is driving beliefs that the state and nation are headed in the wrong direction and voters are not as pleased with Gov. Gretchen Whitmer or President Joe Biden as they were before.

The findings, released Monday to coincide with the start of the Mackinac Policy Conference, also come the same day Pfizer announced internal testing that shows its vaccine is safe and effective for children as young as 5.

A handful of sessions at the conference, hosted on Mackinac Island, will delve into COVID-19's impact on Michigan.

More than 55% of people surveyed support mandating COVID-19 vaccinations for schoolchildren, once the U.S. Food and Drug Administration approves inoculation for all kids and as long as there is a waiver program. That includes 40.8% who said they would strongly support such a mandate.