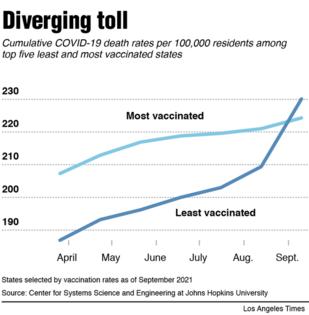 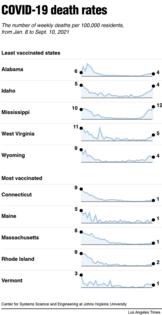 But the damage from the coronavirus has been far from homogenous, in large part because of geographic differences in vaccination rates.

Mississippi, West Virginia, Idaho, Alabama and Wyoming — all deeply red states — each have a vaccination rate of about 40%.

That figure ranges from 67% to 69% in the solidly blue states of Rhode Island, Maine, Massachusetts, Connecticut and Vermont — in that order.

Those five states suffered much more than the five red states in 2020, primarily because New England was an early epicenter of the pandemic.

That gap soon began to narrow. The reasons almost certainly have more to do with policy and politics than with vaccines, which at that point were in short supply and reserved primarily for health workers.

Wary of more deaths, the Democratic governors of Rhode Island, Maine, Vermont, Massachusetts and Connecticut all declared states of emergency.

All imposed mask mandates as well as travel restrictions that required people arriving from out of state to either quarantine or test negative for the virus. People were much more likely to follow federal recommendations for social distancing.

In Connecticut, businesses that violated health orders — such as restaurants with unmasked staff or theaters that operated above 50% capacity — could be fined as much as $10,000 per citation.

"The sector rules and capacity limits we've implemented are intended to mitigate the spread of this disease to the greatest extent possible," Gov. Ned Lamont said at the time.

Mississippi, West Virginia, Idaho, Alabama and Wyoming took a far different approach. Their Republican leaders allowed old mask mandates to expire. Many of their constituents had come to view such rules as an infringement on personal liberty.

Bars, theaters and gyms in Wyoming were allowed to resume operations — mask-free — in early March, with Gov. Mark Gordon telling people to "continue to take personal responsibility for their actions and stay diligent."

By late April, the total number of deaths per 100,000 residents in the five red states had climbed to 193 — an 82% increase for the year but still fewer than the blue-state total of 213.

It wasn't long before enough vaccine was available so that anybody who wanted shots could get them. Majorities in the five blue states jumped at the opportunity.

All five governors eventually imposed vaccine mandates for health workers, and in Vermont, Massachusetts and Connecticut, all state employees now must be vaccinated or undergo weekly testing.

In contrast, vaccination campaigns in the five red states faltered as politicians mostly played to their voters.

Wyoming and Alabama followed suit the next month, banning any form of vaccine passport system.

All five governors have held firm, refusing to issue mandates even for health workers, even as the delta variant spread and hospitalizations and deaths accelerated.

When a reporter asked him about his masking policies in August, Mississippi Gov. Tate Reeves responded with ridicule: "If you really want to virtue signal, why are you in this room? Why don't you go to your house and lock yourself up?"

That same month, after nearly two dozen Mississippi hospitals ran out of ICU beds, one transformed a floor of a parking garage into a field hospital.

As a result, the red states have now surpassed the blue states in deaths per 100,000 people over the course of the pandemic. As of Sept. 10, the respective totals were 230 and 224.

The blue states continue to exercise caution, as several have seen increases in cases, hospitalizations and deaths in recent weeks — though on each of those measures they remain in far better shape than the red states.

As children returned to school in Connecticut, Massachusetts and Rhode Island, masks were mandated. In Vermont, where school districts have been allowed to decide for themselves, nearly every one has opted to require masks.

Meanwhile in Idaho, where medical supplies are being rationed and hospitals are nearing capacity, the governor is exploring legal action against President Joe Biden's plan to require vaccine mandates at companies with more than 100 employees.

The Wyoming governor described the plan as "egregious."

At the same time, he is allocating $30 million in federal funding to address health care worker shortages and has said he may call upon the state's National Guard.