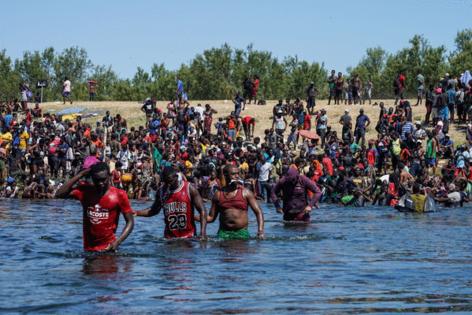 DEL RIO, Texas — Haitian migrants continued to wade through the Rio Grande on Monday to cross into the United States from Mexico, as Department of Homeland Secretary Alejandro Mayorkas traveled to this border city to warn that repatriations will continue despite a recent court ruling.

A federal judge had blocked the Biden administration from expelling families from the United States under the public health law known as Title 42, but delayed the effective date for 14 days.

The delays provide DHS with time to carry out ramped up expulsions, with Mayorkas saying the Biden administration is planning on sending as many as three flights a day to Haiti with migrants who in recent days had crossed into Del Rio from Mexico.

“This is not the way to come to the United States,” Mayorkas said. “Irregular migration poses a serious security risk to the migrants themselves; trying to enter the United States illegally is not worth the tragedy, the money or the effort.

“Our borders are not open, and people should not make the dangerous journey,” Mayorkas said.

He continued to stress the administration’s concerns that Haitians are coming to the U.S. based on false information that the U.S. borders are open and that Temporary Protected Status is available to anyone who arrives.

“If you come to the United States illegally you will be returned,” he said.

Visiting the international bridge in Del Rio where nearly 15,000 migrants, most of them Haitian, have gathered in makeshift tents underneath a bridge, Mayorkas said the scene was “heartbreaking.”

He emphasized the while U.S. Customs and Border Patrol has sent 600 agents to Del Rio, more will be added if needed.

By the end of Monday, approximately 6,000 migrants will have been bused out to other processing centers, to be removed from the United States, and DHS is securing “additional transportation to accelerate the pace and capacity to (send migrants to) Haiti and other destinations within the Western Hemisphere.”