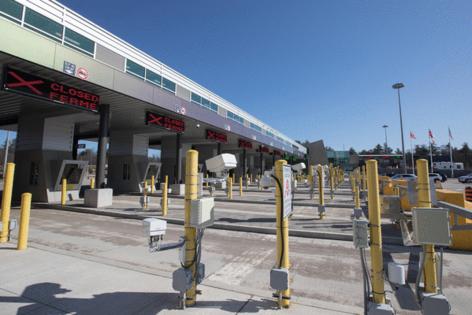 DETROIT — Nonessential travel by Canadians over land and river borders into the U.S. looks like it will remain prohibited for at least another month by the Biden administration.

A Biden administration official on Monday morning said he had no information indicating the restrictions would change with the ban set to expire Tuesday. He noted that other orders relating to COVID-19 and barring noncitizens from crossing the northern and southern borders had been extended into October previously.

The Department of Homeland Security, however, hasn't made any specific announcement that the prohibition on nonessential travel would continue.

Jeff Zients, the White House coronavirus response coordinator, said that beginning sometime in early November, foreign nationals traveling by air will be allowed to enter the U.S. if they have been vaccinated and can show proof of a negative test for COVID-19.

Asked specifically whether the administration had any update on land border restrictions that have been in place since March 2020, Zients said no. Members of Michigan's congressional delegation and others have been urging President Joe Biden to ease the prohibition on nonessential travel with Canada.

Late last week, Michigan U.S. Sens. Gary Peters and Debbie Stabenow, both Democrats, joined other northern border senators urging Biden to reopen travel to vaccinated travelers from Canada by Oct. 1. Restrictions on nonessential travel, they wrote, have "led to economic and emotional strain in our communities."

The prohibition does not affect people traveling across the border to work or seek access to health care. But with such close connections between northern border states such as Michigan and Canada, it has upended familial relationships, tourism and other businesses.

Last month, Canada began to allow U.S. visitors in, including for nonessential visits, prompting many to expect the U.S. to follow suit. Instead, it extended its prohibition on nonessential travel across land borders with Canada and Mexico to Sept. 21, citing concerns over the delta variant.

The administration is also continuing requirements for masking on U.S.-bound aircraft and putting in new procedures for medical personnel in the U.S. to follow up with international visitors and unvaccinated Americans returning from travel.