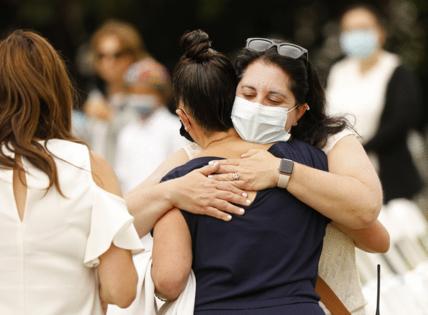 The state has been among the national leaders in that metric for the last week, as the number of newly confirmed coronavirus infections continues to tumble from a peak earlier this summer.

California’s new case rate per 100,000 people is less than half of neighboring states, according to data from the U.S. Centers for Disease Control and Prevention. Some hard-hit states have more than triple California’s numbers.

Last week, the state’s coronavirus transmission level temporarily fell from “high” to “substantial,” the second-highest tier as defined by the CDC. California was the only state to progress into that category at the time, though it — like the rest of the nation, except for Puerto Rico — is now considered to have high community transmission.

The CDC’s scale evaluating coronavirus transmission levels categorizes states as being in one of four tiers: high, substantial, moderate and low.

The federal figures illustrate the recent success California has had in turning the tide of the delta variant-fueled coronavirus wave.

Over the last week, the state has reported an average of just under 9,000 new cases per day — down about 36% from two weeks ago, according to data compiled by the Los Angeles Times.