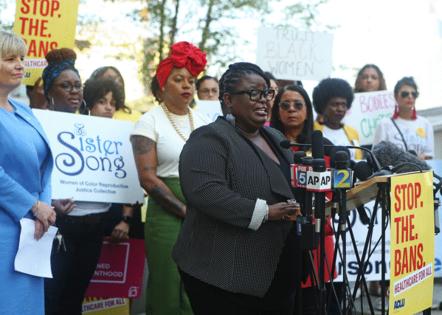 The Georgia attorney general’s office appealed last summer’s ruling that stopped the enactment of a law that would have banned most abortions once a doctor could detect fetal cardiac activity — usually around six weeks of pregnancy and before many women know they are pregnant.

Georgia’s law also includes what many supporters call “personhood” language, which would extend legal rights to fertilized eggs. The American Civil Liberties Union of Georgia, on behalf of abortion rights group SisterSong Women of Color Reproductive Justice and several abortion providers sued the state in 2019. A federal district judge struck down the law in 2020 and the state filed their appeal shortly after the ruling.

“Our lawyers are preparing for the hearing and we feel really good about it,” said Staci Fox, president and CEO of Planned Parenthood Southeast Advocates. “This is settled law. This Georgia law is unconstitutional and that’s why we got a temporary restraining order and we’re fighting for a permanent injunction, which (there is) no doubt the state would appeal.”

The goal of the measure’s supporters has always been to appeal the law to the U.S. Supreme Court where they say it will challenge Roe v. Wade, the 1973 case that established a constitutional, nationwide right to abortion.

Supporters of Georgia’s law have said that it has the best chance of reversing Roe v. Wade because of its provision that grants human rights to fetuses, making abortion the equivalent of murder.

“The foundation of Roe is cracked, and we will soon see a day where that unconstitutional decision is no longer the law of the land,” said Cole Muzio, president of Frontline Policy Action, a group that lobbies for anti-abortion legislation. “We expect that reality to be very much at the forefront of the hearing, and we are confident that we will see Georgia’s Heartbeat Law implemented in our state soon.”

Anti-abortion activists are hopeful that the appeal will go their way after the U.S. Supreme Court allowed a similar restrictive law to go into effect in Texas.

In addition to a ban on the procedure once fetal cardiac activity can be detected, Texas’ law allows private citizens to sue anyone involved in facilitating abortions and anyone who successfully sues another person in that situation would be entitled to at least $10,000.

Some Georgia Republicans are eyeing Texas’ law to see if it can be implemented here while Georgia’s “Heartbeat Law” makes its way through the legal system. ACLU officials said they would fight that.

“Unleashing vigilantes and bounty hunters on Georgia’s health providers and family members who are supporting women’s private choices would be ruthless,” said ACLU of Georgia Executive Director Andrea Young. “The ACLU went to court to block the last abortion ban law and we will fight any attempt to deny Georgia’s women the right to decide.”