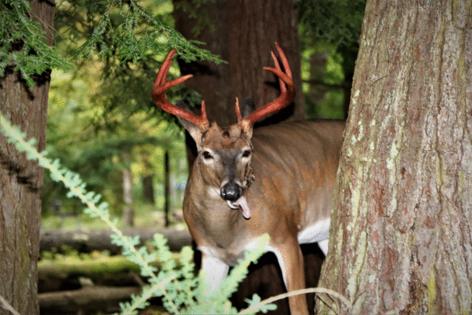 The park shared a photo of one on Facebook, showing it’s as creepy looking as it sounds.

In the photo, a deer with bloody antlers is seen looking into the camera with its tongue sticking out, as if licking its lips.

The sight can be disturbing, rangers admit, but such deer are not sick or dangerous. They’re participating in a seasonal ritual that can be a bit disgusting.

“This time of year, you may see male white-tailed deer in the park sporting bloodied antlers, often with a stringy material dangling from them,” the park wrote in a Sept. 19 Facebook post.

“While it can seem jarring and painful, this is a healthy and painless process for shedding their velvet, a protective layer of skin tissue packed with blood vessels and nerves. The velvet is nutritionally dense and will sometimes be ingested by the deer, as seen here.”

This happens at the start of mating season (the rut), when males “scrape the velvet away on trees and bushes,” the park says. The antlers then harden into the bony horns people come to expect atop a buck’s head, experts say.

A robust set of antlers are an asset for males at mating time, as a sign of maturity and health, as well as a potential weapon for fighting other males, according to the University of Missouri Extension. The antlers drop off at the end of mating season “and the cycle repeats,” the park service noted.

The public is in no danger, but that didn’t seem to put minds at ease on social media. The park’s post got nearly 3,000 reactions and comments in its first day, some calling the photo “nightmare fuel” and others nervously joking “the deer are secretly sacrificing people to their gods using their antlers.”

“I would’ve thought for sure it was a zombie deer,” Adrian Gonzalez wrote.

“No wonder the woods in fairy tales are Grimm,” Jennifer Lemming wrote.

Great Smoky Mountains National Park is known for hosting white-tailed deer, which tourists often see “in areas with open fields such as Cades Cove and Cataloochee Valley,” the park says.

The species stands about 3 feet tall at the shoulders, weighs as much as 200 pounds and is capable of running 40 mph, according to the North Carolina Wildlife Resources Commission.