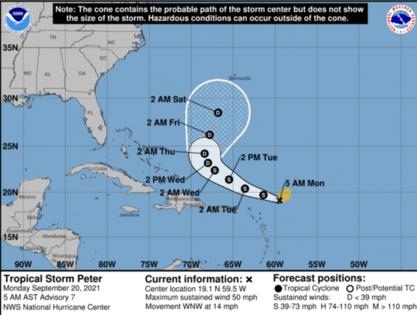 The disturbance that could turn into a depression this week was producing disorganized showers and thunderstorms in the far eastern Atlantic early Monday, several hundred miles southeast of the Cabo Verde Islands, according to the National Hurricane Center.

The other disturbance, the remnants of Tropical Storm Odette, was a couple hundred miles southeast of Newfoundland. While it could acquire some subtropical characteristics this week as it moves over the warmer waters of the north-central Atlantic, its formation chances remained at 30% through the next five days, according to the hurricane center.

Neither of the tropical storms is expected to affect Florida.

Where is Tropical Storm Peter going?

Peter was moving toward the west-northwest near 14 mph with maximum sustained winds near 50 mph with higher gusts. It was about 245 miles east-northeast of the Northern Leeward Islands, as of the National Hurricane Center’s 5 a.m. Monday advisory.

“Based on the latest track, intensity, and wind radii forecasts, no tropical storm watches or warnings are required for the northern Leeward Islands, Virgin Islands, or Puerto Rico at this time,” forecasters wrote. “However, locally heavy rain is possible on Monday and Tuesday when Peter is expected to pass to the north of these locations.”

Peter is expected to keep moving west-northwest for the next couple of days and should pass of the Leeward Islands early this week, forecasters said.

It should weaken back into a tropical depression by the time it turns to the northwest, likely on Wednesday, according to the hurricane center. By Saturday, it should be near Bermuda.

Tropical Storm Rose is moving northeast over the eastern Atlantic with maximum sustained winds near 40 mph with higher gusts. It was about 550 miles west of the Southernmost Cabo Verde Islands, as of the 5 a.m. advisory.

While some slight strengthening will be possible Monday, forecasters expect Rose will slowly weaken back into a tropical depression, and eventually into a remnant, when it’s out in the open waters of the eastern Atlantic this week.

CHICAGO — Jussie Smollett has been a performer all his life, but it’s his role in a real-life drama that is about to come under review by a Cook County jury.

After nearly a week of testimony from 13 witnesses, ...Read More

WASHINGTON — Former Trump campaign chairman Steve Bannon is set to go on trial in July on criminal contempt charges over his refusal to cooperate with the congressional investigation into the U.S. Capitol riot, a judge ...Read More

DETROIT — Eight decades have passed since the Japanese military attacked the American naval base at Pearl Harbor.

Those with vivid memories of the attack on Dec. 7, 1941, are dwindling in number rapidly. There may be as...Read More

NEW YORK — “You’ve got a great body for Mr. Epstein and his friends,” Ghislaine Maxwell told one of the financier’s accusers when she was an underage teen, the woman testified Tuesday, decades later.