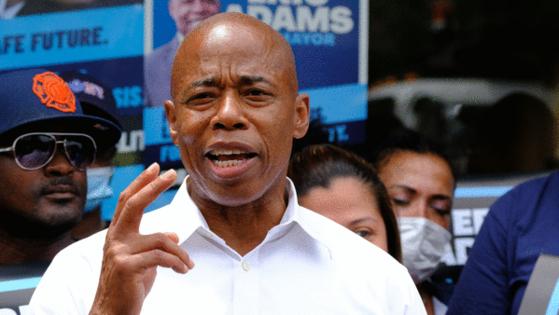 NEW YORK — A new mayor means a new boss at the NYPD next year — and she’ll have her hands full dealing with the city’s surging gun violence, cops’ sagging morale and the department’s frayed community relations.

Yes, the commissioner will likely be a “she.”

Democratic mayoral candidate Eric Adams — who is widely expected to defeat GOP candidate Curtis Sliwa in overwhelmingly Democratic New York City — has promised to put a woman in the job.

But who it will be is anyone’s guess. “He is casting a wide net,” said a source close to the candidate.

Adams might shake up the department with an outsider.

If Lynch gets the nod it could be seen as a step down — from America’s top law enforcement official to the head of the nation’s largest police force.

But an NYPD source said with Lynch now in private practice a move to the top floor of One Police Plaza would be a jump back into the limelight.

“She’s certainly qualified,” the source said. “She has the resume.”

Several internal candidates are also believed to be in the mix.

The most notable possibility within the NYPD is Chief of Patrol Juanita Holmes, who retired from the department in December 2018 but returned in January 2020 and soon afterward assumed her current post.

The others are Chief Judith Harrison, who oversees precincts in north Brooklyn, Chief of Transportation Kim Royster and Assistant Chief Donna Jones, who runs the Criminal Justice Bureau.

Adams “has been clear that his police commissioner will share his belief that we can have both the safety we need and the justice we deserve,” said his spokesman, Evan Thies.

The new commissioner must also possess “the law enforcement and emotional intelligence it takes to run the NYPD and protect New Yorkers,” Thies said.

Whoever ends up with the job faces daunting challenges.

“It’s about guns, guns, guns,” said Richard Aborn, president of the Citizens Crime Commission, a nonprofit that advocates for new criminal justice strategies. “If we don’t get a handle on the gun violence then the city is really in trouble.”

Other woes include low officer morale over protests and assaults that followed the death of George Floyd in Minneapolis, and new laws that restrict police use of force

“I think the Police Department has been irreparably damaged,” said Eugene O’Donnell, a former cop and a professor at John Jay College of Criminal Justice in Manhattan.

“Cops have no one supporting them,” said O’Donnell. “Scores of officials, literally from the president on down, have been blasting the cops.”

O’Donnell lamented protesters’ “insane comparison of the NYPD to some sort of iron curtain police force.”

O’Donnell says it will be important for the new mayor to let his commissioner do the job free of mayoral interference — which he feels was a problem with Mayor de Blasio.

The Police Benevolent Association, the city’s biggest police union, had no comment on a future commissioner. Lynch allowed a Civil Rights Division probe of now-fired Staten Island cop Daniel Pantaleo — who the PBA firmly supported — over the chokehold death of Eric Garner.

“Be a leader,” he said. “Build up morale and build up relations in communities, but be a decisive leader capable of making tough decisions even if it’s not popular with anti-police factions.”