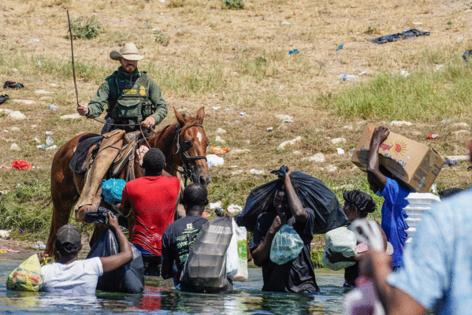 DEL RIO, Texas — A week after Haitian migrant Junior Desterville, 30, and his family had made it all the way from Chile to the burgeoning migrant camp here on the U.S. banks of the Rio Grande, the shaggy-haired mechanic set back out to the Mexican side early Sunday to buy food for his hungry wife and 4-year-old daughter, Nayalla.

By noon, Desterville, dressed in a blue T-shirt and black shorts, had waded back north through the chest-high water to return successfully from Ciudad Acuña as Mexican police and Texas state troopers sought to block ongoing river crossings by hundreds of incoming migrants.

Making his way past a crowd of hundreds and up dirt trails along the riverbank that reeked of human waste, he found his wife, Stephanie, in one of the scores of huts that migrants have built from the carrizo cane lining the waters. They have slept on the dirt inside the hut since making their way to this hot, chaotic camp of an estimated 14,000 migrants after a three-month slog, mainly by bus, through Chile, Central America and Mexico.

“We don’t have a president or security,” he said, referring to the recent assassination of President Jovenel Moïse and devastating earthquake.

For many, however, crossing the Rio Grande appears likely to mean a one-way air ticket back to troubled Haiti.

On Sunday, the Biden administration began making good on its promise to send Haitian migrants in Del Rio back to their homeland, the Associated Press reported. The U.S. sent back three flights of migrants taken from the camp, and the number of flights is expected to reach at least six a day shortly, according to a U.S. government official who spoke on condition of anonymity because the official was not allowed to discuss the issue publicly.

The planes left from San Antonio, the AP reported, and arrived Sunday afternoon in the Haitian capital, Port-au-Prince, each carrying 145 passengers.

Families on the first flight held children by the hand or carried them as they exited. Dozens lined up for a meal of rice, beans, chicken and plantains while pondering where they would find housing or jobs. Each was given $100 and tested for COVID-19, though there was no plan to place any in quarantine, said Marie-Lourde Jean-Charles with the Office of National Migration.