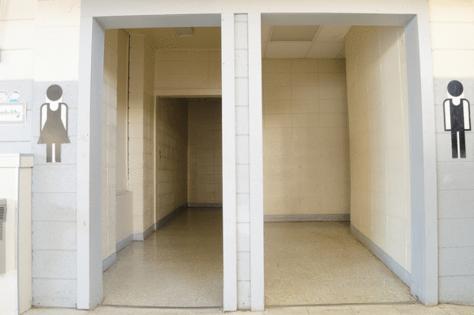 CHICAGO — The so-called devious lick TikTok bathroom challenge that has lured teens nationwide to wreak havoc on school restrooms has arrived in suburban Chicago districts, where officials are warning the latrine marauders that videotaping their friends yanking soap dispensers off the wall is no laughing matter.

TikTok has now blocked users from viewing any videos with the “devious lick” hashtag. But the censoring of the viral videos came too late to prevent students from pillaging some bathrooms at York High School in Elmhurst, where Principal Shahe Bagdasarian said the restroom unrest is “believed to be the result of the TikTok Bathroom Challenge, which promotes vandalism in school restrooms by students.”

“Any student(s) participating in inappropriate activities, such as vandalism, are subject to disciplinary measures for unlawful or improper conduct, including but not limited to payment for damages from students and their parents/guardians and referral to the Elmhurst Police Department,” Bagdasarian wrote in a recent parent letter.

The high school will “continue to monitor student usage of our bathrooms. In the event that these behaviors continue, we will reduce the number of bathrooms available to our students during the school day,” Bagdasarian said.

At Palatine-based Township High School District 211, officials said they are also seeing “damage and theft, primarily in our bathrooms, relating to the TikTok challenge, and have increased supervision in these areas,” District 211 spokeswoman Erin Holmes said.

“Damage has occurred to a wide variety of bathroom items, including soap dispensers, mirrors, stalls and toilets,” Holmes said. The school district is working “collaboratively with law enforcement and identified and disciplined some students already,” she said.

“We have no cost estimate at this point but are notifying parents that any student caught willfully damaging, stealing or vandalizing school property is subject to suspension and could be arrested for criminal damage to property or theft,” Holmes said.

The cost to replace damaged or stolen property, as well as the cost of the repair, “will be the responsibility of the student,” Holmes said.

“We are proud of our District 211 students who have come forward to report this behavior,” she said. “We know the majority are not participating in this trend.”

Holmes said the district is encouraging parents “to speak to their students about this topic and make positive decisions.”

The district does not have an estimated cost for repairs, but “staff at all schools are on the lookout for suspicious activity in the bathroom,” Kim said.

“Our administration is investigating. Any students identified will face disciplinary action,” she said.

While the recent rash of vandalism to school bathrooms across the U.S. is being blamed on the TikTok videos going viral, one expert who studies juvenile crimes said decades before the arrival of social media, some adolescents have viewed vandalism as a way to enhance their status with their peer group.

“Vandalism is acting out in a malicious way, and it’s an act of aggression that is communicating a message against property, but ultimately, it is aimed at people, and at an institution, in this case, their school,” said Arthur Lurigio, a professor of psychology and criminal justice at Loyola University Chicago.

Even law-abiding teens who have never before committed a crime, especially adolescent boys, might be drawn to this type of risky behavior “because they don’t see the consequences,” he said.

“Whether it’s cramming as many kids as possible into a phone booth or a VW bug, adolescents have always had poor judgment, and poor impulse control, but now, with social media, kids can put their pranks on a world stage,” Lurigio said.

ATLANTA — When the second-ranking Republican in the Georgia House saw a proposal to ban “obscene” books from libraries, she dialed up state education officials to raise her objections. Two years later, Jan Jones is ...Read More

WASHINGTON — Former White House Chief of Staff Mark Meadows will be the third Trump ally to be subject to a contempt of Congress charge from the Jan. 6 select panel if he refuses to show for a deposition Wednesday.

FORT LAUDERDALE, Fla. — Florida’s surgeon general, the controversial doctor who has cast doubt on the safety and effectiveness of vaccines, is the star of a new public service announcement that touts “innovative ...Read More

SACRAMENTO, Calif. — Gov. Gavin Newsom, who wrote a book about his own struggle with dyslexia, intends to steer more money through the state budget toward screenings for the condition, as well as additional funding for ...Read More