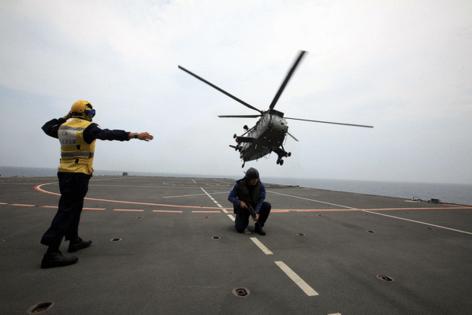 They also share a passion for undiscovered historical hulks, those vessels lost to time and shifting sands. They know the waters off Southern California are home to dozens of them. So they pore over sonar maps and video footage taken by remote controlled submersibles for signs of ghostly ruins, and then dive to see what’s there.

This summer, the divers found what they thought might be the Holy Grail of lost helicopters, a Navy Sea King famous for plucking Apollo astronauts from their capsules after moon-mission splashdowns.

Known informally as Helo 66, for the number painted on its side, the Sea King crashed west of Coronado during a nighttime training mission on June 4, 1975. Four crew members were rescued, but one died a few weeks later from his injuries.

Although an accident report said the copter sank in water about 4,800 feet deep, there have been rumors in military and diving circles that it’s been spotted over the years in much shallower sea, about 200 feet down. Some of the reports claimed the fuselage was still intact — unlikely, because of the way helicopters typically come apart in crashes, but tantalizing.

So when Stalter was on the internet one day and saw underwater video footage of what looked like a helicopter wreck in local waters — and at a depth that matched the rumors — he and Eldridge got excited. They chartered a dive boat, Marissa, in July.

A dive that deep is beyond the safe reach of recreational compressed-air tanks. Trained as technical divers, the two used mixed gases instead, a technique that allows for deeper dives but shortens how long they can stay below because it requires decompression stops on the way up.

They had about 20 minutes to explore, and what they found was promising. A main rotor and engine. Bits of a fuselage and part of a tail with some lettering on it. A rear rotor and a landing gear with two wheels. A dipping sonar, used to hunt submarines.