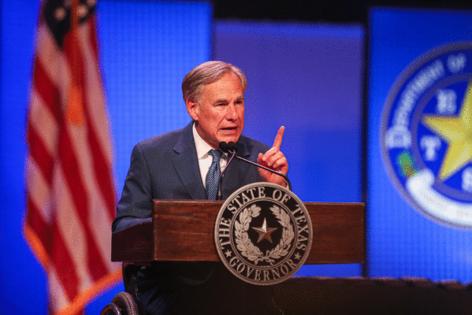 AUSTIN, Texas — Texas Gov. Greg Abbott has signed two significant spending bills into law: one to nearly double state spending on border security initiatives and another to pay for various priorities passed during the second special session, including restoring funding for the legislative branch that he vetoed earlier this year.

Abbott was in Fort Worth on Friday to sign the border spending bill, sitting alongside law enforcement officers and Sen. Jane Nelson and Rep. Greg Bonnen, both Republicans and the two chief budget writers at the statehouse.

The measure directs $1.8 billion to different agencies and initiatives, including construction of a border wall along the U.S.-Mexico border and deployment of additional law enforcement officers to border communities. Democrats have criticized the legislation for lacking accountability measures and over-emphasizing law enforcement response over humanitarian aid.

"This is basically signing a multibillion-dollar check," Abbott said as he put pen to paper and signed the bill into law.

Abbott on Friday also signed House Bill 5, a $1.5 billion bill that includes about $90 million for the state's foster care system and more than $700 million for a one-time payment for retired teachers.

It also puts back about $315 million into the state budget for 2022-23 to fund the legislative branch, including the Texas House, Senate and various agencies that support the Legislature in its work. The measure pays for salaries, benefits and insurance coverage for thousands of employees, plus leases for lawmakers' district offices, equipment services and office supplies.

Abbott vetoed the funding earlier this year, after Democrats walked off the House floor at the end of the regular session and killed a GOP elections bill. When he called lawmakers back to Austin for two special sessions, he included reinstating funding for the legislative branch on the agenda to discourage Democrats from staging another walkout.

Abbott did not sign the funding bill in a public setting and did not address it during his public event for the border security bill.