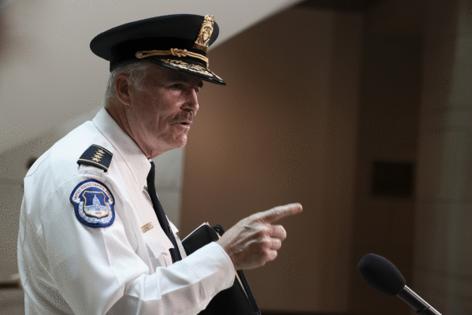 WASHINGTON — Capitol Police Chief J. Thomas Manger said his department and law enforcement partners are ready for Saturday’s “Justice for J6” protest in support of jailed rioters who stormed the Capitol on Jan. 6.

Manger said at a press briefing Friday that D.C. National Guard troops would be available if the rally — expected to end around 1:15 p.m. in Union Square, on the west side of the Capitol — goes longer than anticipated.

“If it goes longer, for whatever reason, we could call them to help us secure the perimeter of the Capitol,” Manger said of the National Guard members who will be at the D.C. Armory. “No, we’re not asking for them to be armed,” he added.

The organization Look Ahead America — led by Matt Braynard, a former Trump campaign employee — requested a permit for up to 700 people to demonstrate at noon. They are seeking to support imprisoned insurrectionists whom Braynard has described as “political prisoners.”

If any groups decide to breach the fence or attack law enforcement, Manger said, “we’ll be ready.”

A Capitol Police intelligence assessment observed that the department and other law enforcement agencies are seeing increasing violent online chatter about the protest. The far-right website 4chan has calls to “do justice” against “local jews and corrupted officials.”

Further, users on the site say the demonstration should be an avenue for violent acts against local “Jewish centers and Liberal churches” while law enforcement is distracted.

Remora House DC put out an alert that states, “Fascists coming back to DC Sept. 18 for a rally at Union Square Plaza (west Capitol grounds) to support Capitol rioters that have been arrested … More details on how to get involved coming soon.” DC Youth Liberation Front has also shared a call for counterprotesters.

Clashes between the pro-insurrectionist group and the counterdemonstrators are top of mind for Manger.