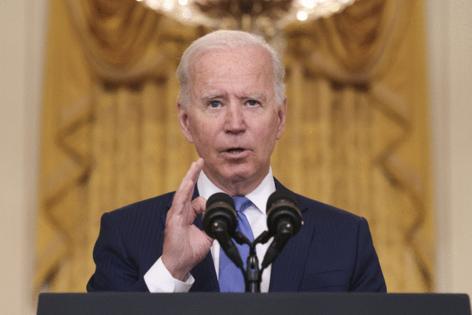 Biden has quoted “Easter, 1916” by W.B. Yeats seven times since June, according to White House transcripts, including twice in one day this week in remarks focused on the wildfire response in Idaho and California.

“All changed, changed utterly: A terrible beauty is born,” Yeats wrote in 1916 in the aftermath of the Easter Rising in Dublin, a six-day rebellion against British rule in Ireland.

During a speech to the European Council in Brussels in June, Biden used the line to talk about technological change.

This week in Boise with Republican Idaho Gov. Brad Little, Biden used it to illustrate how the strategy for combating wildfires had evolved since the 1988 Yellowstone fire.

“A terrible beauty has been born,” Biden said. “From the Yellowstone fire to today, all has changed in a drastic, drastic way.”

And just hours later in Mather, California, at an event with Democratic Gov. Gavin Newsom, Biden used the Yeats poem to discuss how his administration was responding to climate change, which he argued has exacerbated wildfires and other extreme weather events.

“And the truth is, all has changed. It’s changed in a way that it’s never going go back to what it was 10, 15 years ago. It’s simply not the case,” Biden said after quoting the line from Yeats, and promised that his administration would not reverse course on its climate strategy.

Andy Murphy, a professor of English at Trinity College Dublin, said the president uses the line in a way that’s distinct from the meaning in the poem but which makes sense rhetorically.