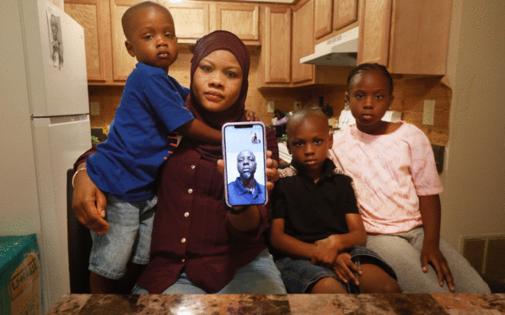 The Mauritanian native, 39, tried to hold back tears as his children — ages 3, 7 and 8 — talked about their lives in Columbus without him. Before hanging up, Lam told the kids how much he missed them and his wife that he wanted to kiss her.

In 2004, Lam escaped persecution in his home country and came to the U.S. seeking asylum. His application was denied, but he was allowed to stay in the country without status.

In December 2017, however, he was detained following a routine checkup with U.S. Immigration and Customs Enforcement. Four months later, he was ushered onto a deportation flight to Mauritania in Africa — only nine days after his youngest son was born.

"I was thinking it was the American dream for me, but, sadly, it just turned into a nightmare," Lam said during a phone call from Senegal, where he now lives.

Lam is one of the nearly 1 million immigrants who were forced to leave the country during the Trump administration.

Among them, thousands were unjustly deported, said Nayna Gupta, associate director of policy at the Chicago-based National Immigrant Justice Center. These were people who either had the legal ground to stay or whose compelling circumstances warranted a positive exercise of discretion, she explained.

In Ohio, at least 50 asylum-seekers were deported to dangerous living conditions in the past four years, according to Maryam Sy, an organizer at the Ohio Immigrant Alliance. Many still have family members here. Lam's children, for example, all were born in the U.S., and his wife, who is from Mauritania, has a pending asylum application.

More than half of these Ohio deportees came from Mauritania, where Black residents have been stripped of citizenship, detained, tortured, sometimes even killed. But for a variety of reasons that could range from lack of legal representation to judges' unsympathetic attitudes, they did not receive asylum status, Sy said.

Lam saw a glimpse of hope when President Joe Biden promised to reunite separated migrant families. But now, more than three years after his deportation and seven months into the new administration, he is still trapped living abroad and has no way to come back.