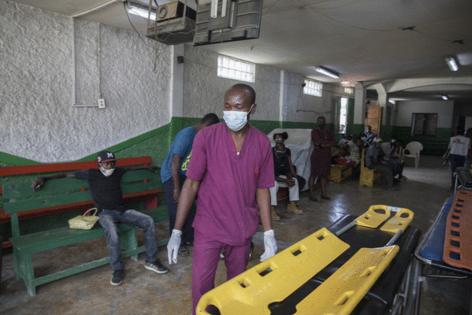 PORT-AU-PRINCE, Haiti — Underneath an open-air awning with aluminum ceilings and fans, on the outskirts of Haiti’s capital, patients trickle in to get a much awaited jab of a COVID-19 vaccine.

The list of takers at St. Damien Nos Petit Frères et Soeurs pediatric hospital in Tabarre includes a university professor, a nurse who works in a COVID-19 ward and an accountant. There are older people too, as well as young mothers accompanied by their children.

Despite the lines, Haiti’s vaccination rollout has been slow, prompting the World Health Organization’s Americas region office this week to call on Haitian authorities and the country’s partners to “work together to intensify COVID-19 vaccination efforts.”

“Increasing vaccine uptake is important to protect the country from COVID-19 transmission,” Dr. Carissa Etienne, head of the Pan American Health Organization, said as she asked the international community not to forget about Haiti.

Etienne’s plea comes as Haiti and international partners struggle to respond to last month’s deadly earthquake that struck the country’s southern peninsula. Humanitarian aid efforts continue to be hampered by the ongoing presence of armed gangs blocking the main road connecting the capital to the hard-hit regions and as health officials confirm the presence of the highly contagious Delta and Mu variants in the country.

In July, seven days after the shocking assassination of President Jovenel Moise, Haiti became the last country in the Americas to receive a shipment of COVID-19 vaccines when 500,000 doses of Moderna shots arrived from the United States via the United Nation’s vaccine-sharing program known as COVAX.

The rollout, which started two days later with support from UNICEF, looked promising, with health workers at St. Damien receiving at least 100 people a day, and the number of people coming to get vaccinated surpassed expectations. The U.N., initially concerned about how to get vaccines to communities outside of the capital, reported success in getting them there by road, despite the presence of armed gangs.

At the time, the COVID-19 situation was no worse than it had been, but officials were concerned because of the presence of the delta variant in Florida and elsewhere in the Caribbean.

Now the highly contagious variant is present and the country is embroiled in a deepening political crisis and the ongoing quake response. To date, Haiti’s government has managed to vaccinate less than 1% of the country’s 11.5 million people.

“So far Haiti has administered some 52,000 vaccines and many more people need to be vaccinated,” she said, adding that less than “1% of their population covered with an available 500,000 doses is totally unacceptable.”