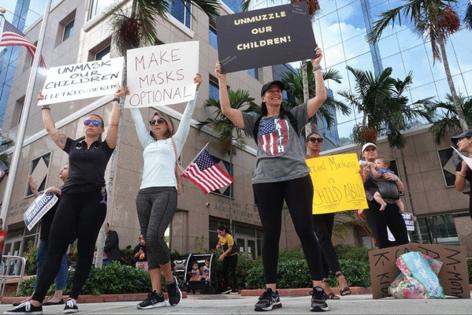 Republican legislators in more than half of U.S. states, spurred on by voters angry about lockdowns and mask mandates, are taking away the powers state and local officials use to protect the public against infectious diseases.

A KHN review of hundreds of pieces of legislation found that, in all 50 states, legislators have proposed bills to curb such public health powers since the COVID-19 pandemic began. While some governors vetoed bills that passed, at least 26 states pushed through laws that permanently weaken government authority to protect public health. In three additional states, an executive order, ballot initiative or state Supreme Court ruling limited long-held public health powers. More bills are pending in a handful of states whose legislatures are still in session.

In Arkansas, legislators banned mask mandates except in private businesses or state-run health care settings, calling them “a burden on the public peace, health, and safety of the citizens of this state.” In Idaho, county commissioners, who typically have no public health expertise, can veto countywide public health orders. And in Kansas and Tennessee, school boards, rather than health officials, have the power to close schools.

President Joe Biden last Thursday announced sweeping vaccination mandates and other COVID-19 measures, saying he was forced to act partly because of such legislation: “My plan also takes on elected officials in states that are undermining you and these lifesaving actions.”

— In at least 16 states, legislators have limited the power of public health officials to order mask mandates, or quarantines or isolation. In some cases, they gave themselves or local elected politicians the authority to prevent the spread of infectious disease.

— At least 17 states passed laws banning COVID-19 vaccine mandates or passports, or made it easier to get around vaccine requirements.

Much of this legislation takes effect as COVID-19 hospitalizations in some areas are climbing to the highest numbers at any point in the pandemic, and children are back in school.

“We really could see more people sick, hurt, hospitalized or even die, depending on the extremity of the legislation and curtailing of the authority,” said Lori Tremmel Freeman, head of the National Association of County and City Health Officials.