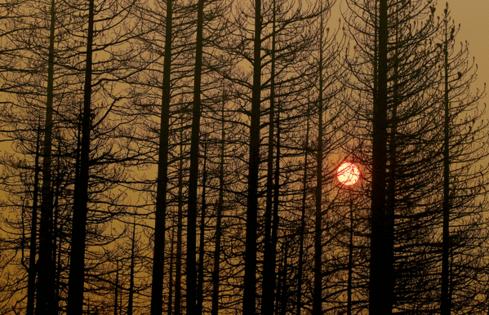 SOUTH LAKE TAHOE, Calif. — Just hours before the Caldor fire threatened to level the resort town of South Lake Tahoe, the massive blaze performed a staggering feat: burning from one side of the Sierra to the other.

It seared through crests and valleys, over foothills and ridges — and also at elevations of 8,000 feet or higher.

Ash and smoke rained down on the Tahoe basin and sent thousands fleeing from its soot-darkened shores as the fire skirted a towering granite ridge many believed would be a buffer from the flames. But the fire kept climbing higher, jumping from tree to tree and spewing wind-whipped embers that landed, in some cases, more than a mile away.

Experts said the fire’s extreme behavior is part of a worrisome trend driven by the state’s warming climate, in which rapid snowmelt and critical dryness are propelling wildfires to ever-higher elevations, scorching terrain that previously was too wet to burn and threatening countless residents.

“What we’re seeing is that these fuels at high elevations that typically weren’t able to carry a fire now are able to carry fire,” said John Abatzoglou, an associate professor of climatology at the University of California, Merced and co-author of a recent study about wildfires at higher elevations. “That’s allowing these fires to effectively reach new heights.”

The study, published in June in the Proceedings of the National Academy of Sciences, found that climate warming over the last few decades has exposed an additional 31,400 square miles of U.S. forests to fires at higher elevations.

It also found that between 1984 and 2017, fires in the Sierra Nevada advanced in elevation by more than 1,400 feet, surpassing some previously dependable moisture barriers.

Of the 15 ecological regions researchers studied, the Sierra Nevada was among three that saw the greatest upslope advances, along with the southern and middle Rockies.

“We do see in the Sierra Nevada that fires have increased in terms of their burned area over the past 40 years,” Abatzoglou said. “What’s novel here is that we’re documenting an additional shift in the elevational bands where those fires are occurring.”

Before the year 2000, it was rare for a forest in the Sierra Nevada to burn above 8,200 feet, Abatzoglou said. In the years since, there has been an eightfold increase in forested burned areas at that elevation. Both the Caldor fire and the Dixie fire — the state’s second-largest wildfire on record — passed that elevation threshold.

ATLANTA — Every Georgia voter was already required to have some kind of ID to vote.

Whether they have the right kind of ID to most easily vote by mail under the state’s new voting law is another matter.

San Francisco Mayor London Breed was seen at a nightclub earlier this week and was not wearing a mask, despite the city’s requirement to wear face coverings in indoor public settings, according to a published report.

The Cuban government published the draft of a new family code this week that would allow same-sex marriage, adoption by gay couples and recognizes surrogacy, but the road ahead is long, because the legal framework must be ...Read More