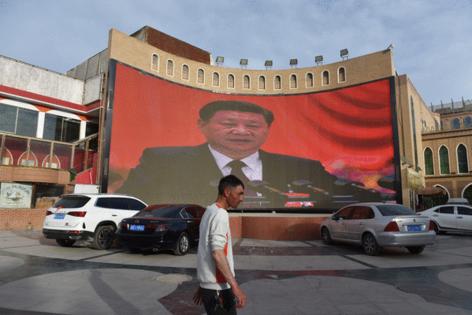 Celebrity names are vanishing from the credits of TV shows. Effeminate male idols — "sissy boys" — have been vilified. Tech moguls have been urged to donate billions of dollars to philanthropy. And kids went back to school last week with new rules banning foreign textbooks and requiring more classes on the nation's leader, Xi Jinping.

The changes are part of Xi's new "common prosperity" campaign to narrow the gap between rich and poor and create "material and spiritual wealth."

It's a noble-sounding slogan. But it looks more like a top-down purification than a strategy for economic reform. Xi is fixed on purging society of greed, corruption and moral failings he views as threats to socialism. Freewheeling capitalists and Western influences have become targets, while structural issues like bloated state-owned companies and a weak social safety net are left unaddressed.

That has raised questions about whether "common prosperity" is less a design to reduce inequality than to concentrate political power and ideological control while blaming the rich and famous for the nation's ills. Over the last month, Xi has cracked down on tech, education and entertainment. He has called for corporations and wealthy individuals to "give back more to society" at a time when the Communist Party is under pressure as the economy cools.

Tech titans have scrambled to respond. Tencent and Alibaba have each pledged more than $15.5 billion to "common prosperity" initiatives. The founders of ByteDance, Pinduoduo and Xiaomi have also donated millions to charity.

Entertainers and entrepreneurs have attracted cult followings in China over the last few decades as their wealth burgeoned along with the country's rapid growth. Bookstores sold stacks of memoirs by tech billionaires who preached a gospel of self-made success. Alibaba co-founder Jack Ma opened an elite academy to cultivate entrepreneurs.

Celebrity fan clubs became networks of mass mobilization, rallying millions of members to support their idols online with clicks and money. Such clubs were publicly praised last year when they outperformed the Chinese Red Cross Society in sending aid to Wuhan during its coronavirus lockdown.

But the winds have suddenly shifted.

In August, actress Zheng Shuang was fined $46 million for tax evasion. Actor Zhang Zhehan was banned after photos circulated of him at a controversial war shrine in Japan. Billionaire actress Zhao Wei also disappeared from the Chinese internet last month with no official explanation. The National Radio and Television Administration has released an eight-point plan to purge the entertainment sector of celebrities of "fake, ugly and evil values."

Entertainers should not use their fame for profit or be well-paid, the plan said. They should promote traditional culture and "establish a correct beauty standard," it said, singling out "sissy idols," or men who wear makeup or act feminine, as a particular offense.

AUSTIN, Texas — Texas Gov. Greg Abbott has signed two significant spending bills into law: one to nearly double state spending on border security initiatives and another to pay for various priorities passed during the ...Read More

The expired doses were ...Read More

BOISE, Idaho — The Idaho Department of Health and Welfare implemented crisis standards of care statewide this week as the state's health care systems have become overwhelmed with unvaccinated COVID-19 patients.