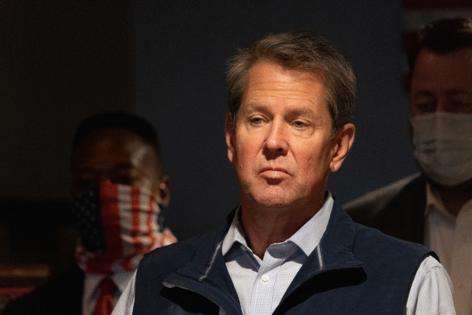 Georgia parents were teetering between hope and anxiety in early August as children were returning to classrooms. COVID-19 cases and hospitalizations were rising again after a mid-summer lull, and the CDC had just called for everyone in places like Georgia, with high disease transmission, to go back to wearing masks indoors.

Gov. Brian Kemp didn’t echo that call. When he went on national television to talk about the new school year, he spoke of masks as tools of government overreach, accusing the CDC of doublespeak. We don’t need mandates to know what to do, he said on Fox and Friends. His refrain there and at press conferences: We need to trust people to do the right thing.

In the days following, Kemp told Georgians to follow scientific guidance. But he also said it was up to every individual whether to wear masks or get vaccinated. Later, he gave state government workers the Friday off before Labor Day so that any who were unvaccinated could — if they so desired — schedule their shots.

But the state’s vaccination rate barely budged as hospitalizations and infections in classrooms continued to soar during the pandemic’s lethal fourth wave.

It’s been a milquetoast approach, public health advocates say, and one that’s led to the worst health crisis in the state’s history. Kemp hasn’t taken aggressive measures to stem the spread of disease, instead taking piecemeal steps to help hospitals cope with the horrific consequences.

It wasn’t until intensive care units filled with COVID-19 patients, and the death toll was skyrocketing toward 20,000, that the governor did more to try to boost vaccinations. To encourage state government employees and retirees to consider getting the shots, he added incentives of a $150 Visa gift card or $480 in credits for health care expenses. State officials said they don’t know, though, how many state workers are unvaccinated, and public records requests to state agencies revealed no documents on those rates.

While Kemp is resistant to mandates, critics say he has other options to tackle the virus’ spread head-on. He could offer incentives to younger people to get vaccinated and vastly expand mobile clinics. At the least, he could barnstorm the state to shed light on the tragedies unfolding in hospitals. He also could use his bully pulpit to dispel misinformation and make clear what Georgians need to do to save lives.

“It’s not an enthusiastic endorsement that says, ‘God, please, get vaccinated. Save your children. Save your own life,’” said Mark Rosenberg, who spent 20 years as a researcher for the Centers for Disease Control and Prevention and 16 years as president and CEO of the Task Force for Global Health.

“Brutal honesty” is essential in times of crisis, along with “credible hope,” said Nancy Koehn, a professor of business administration at the Harvard Business School and author of “Forged in Crisis: The Power of Courageous Leadership in Turbulent Times.”

PHILADELPHIA — A Bucks County gym owner who recorded herself during the storming of the Capitol saying she was looking for Speaker Nancy Pelosi “to shoot her in the friggin’ brain” pleaded guilty to a federal ...Read More

ST. LOUIS — A St. Louis suburb remains in the running for a controversial statue that features the Native American guide Sacagawea, but the fundraising drive to pay for its relocation is lagging, and Osage Nation ...Read More

ATLANTA — Emory University, in a move aimed at healing centuries-old wounds, has apologized for its role in displacing Native Americans.

This week, the Emory board of trustees approved an official “Land Acknowledgment...Read More

CHICAGO — As former President Barack Obama took the podium during his presidential center’s long-delayed groundbreaking, he looked back on his first taste of the city that would forever shape him: driving up the ...Read More