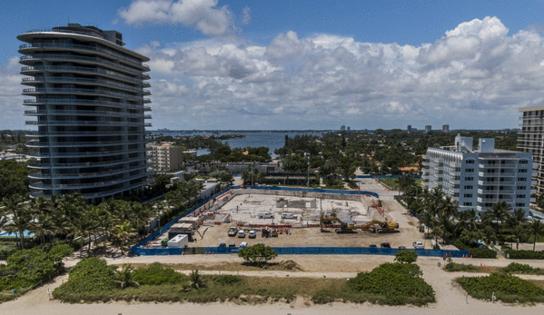 MIAMI — As a judge fast-tracks the development of a new high-rise on the Champlain Towers South property, the families of those who died in the Surfside condo collapse are increasing pressure on town leaders to drop their resistance to a plan to ensure a memorial is built where the tower fell by trading public, oceanfront land to the eventual buyer of the collapse site.

Still grieving the deaths of their loved ones, Surfside families are now taking the fight to Town Hall, where Tuesday night they will ask the commission to consider a proposal to build a memorial at 8777 Collins Ave., along with a new community center. In exchange, the town’s current community center would be torn down and the planned redevelopment of the Champlain property moved to where the center is now located, about six blocks north on Collins Avenue.

A majority of the town’s commissioners have spoken out against the idea, as has the town’s top administrator.

Sofia Kaufmann, whose parents died in the collapse, said she supports the land-swap because asking a developer to build a memorial and a new high-rise on the site of a collapse would lessen the value of the land, meaning victims would be compensated less.

“The swap would really be a win-win for everybody,” she said.

Other nearby properties have been floated as the site of a future memorial for the victims of the collapse, which killed 98 people when it fell on June 24. But the land-swap plan has the support of the Miami-Dade judge overseeing the class-action lawsuit stemming from the collapse, who said it would allow for the victims to be compensated through a property sale while allowing for a memorial to be built on the collapse site.

Still, getting support from the Surfside commission will be a long shot. Affirmative votes from four of the five commissioners are needed to approve the plan, followed by passage in a townwide referendum with 60% of the vote. Already, four commissioners have come out against the plan, saying that the center is too important to its residents to tear down and move from its central location to near the southern edge of town. Mayor Charles Burkett is the only member of the commission who has said he would support letting voters decide on the matter.

Commissioner Eliana Salzhauer, who drew criticism from families and Judge Michael Hanzman for calling the idea “delusional,” said the families and their attorneys have created the “false narrative” that a land swap is the only way to build a memorial on the collapse site. She said if enough families told Hanzman to sell 90% of the land and keep 10% for a memorial, he would be forced to listen.

“Why aren’t they mad at the judge?” she said. “It’s their property, they have a say in what happens to it.”

She added: “They want the most money for the land and they want to control what happens to it and they want our community center. And that’s where we have to say, ‘Wait a minute.’”

SANTA FE, N.M. — Authorities have determined the projectile that fatally wounded cinematographer Halyna Hutchins was a lead bullet, one of roughly 500 rounds of ammunition recovered from the set of the film “Rust,” ...Read More

WASHINGTON — The head of the House tax-writing committee said a proposal to put a levy on the assets of billionaires has been dropped in negotiations over revenue measures to pay for President Joe Biden’s social ...Read More

DETROIT — Michigan's fourth coronavirus surge, driven by the highly contagious delta variant, may be starting to retreat after more than three months of a steady rise in cases, hospitalizations and deaths.

ATLANTA — As jury selection continues in the trial over Ahmaud Arbery’s death, lawyers for the three defendants expressed concern over whether demonstrations near the courthouse could intimidate potential jurors. The ...Read More

MIAMI — A state ethics panel has recommended that a no-party candidate be fined $20,000 and formally reprimanded by Gov. Ron DeSantis for violating campaign finance laws, which included accepting money from a Miami ...Read More