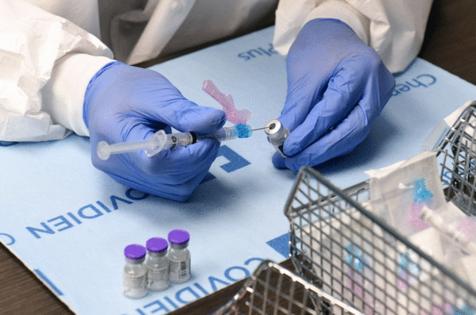 The state’s move to force mandatory COVID-19 vaccinations for medical workers was temporarily blocked Tuesday by an upstate federal judge after a group of health care workers sued over New York’s hard-line ban on religious exemptions.

The 17 health care professionals claimed the mandate violated their Constitutional rights, with Utica Federal Court David Hurd giving the state until Sept. 22 to respond to the lawsuit brought by the plaintiffs one day earlier.

The group, who filed using pseudonyms, are Christian doctors, nurses and other medical professionals who made it clear in court papers that they were not “anti-vaxxers” opposed to all vaccines but opponents of this plan due to their deeply-held religious beliefs.

The state-issued order was announced Aug. 28, and required at least a first shot for health care workers at hospitals and nursing homes by Sept. 27. Under Hurd’s order, a Sept. 28 oral hearing will be convened if the state opposes the plaintiffs’ bid to opt-out of the vaccines.

According to the court papers, the plaintiffs challenged the state Department of Health edict because it lacked an opt-out for “sincere religious beliefs that compel the refusal of such vaccination.”

More specifically, the group — including a nuclear medicine technologist and a cognitive rehabilitation therapist — said in court papers that all the current COVID vaccines employed aborted fetus cells at some point in their testing, production or development.

“Plaintiffs’ motion for a temporary restraining order is granted,” wrote Hurd in his decision.

The physicians’ lawsuit cited violation of their rights under the U.S. Constitution, along with the state and city Human Rights Laws, because it fails to consider their legitimate opposition to forced vaccines.

All insist on avoiding any medical cooperation with abortion due to their religious beliefs.

According to the lawsuit, the plaintiffs — identified only as “Dr. A” or “Nurse A” in court papers — opted to proceed anonymously over fears of a backlash as the pandemic heads deep into its second year.

The 17 medical professionals fear that making their names public will make them “run the risk of ostracization, threats of harm, immediate firing and other retaliatory consequences.”

“This order does not suspend the vaccine mandate, but it temporarily bars the Department of Health from enforcing the mandate where individuals have claims for religious exemption,” said Hazel Crampton-Hays, press secretary to Gov. Hochul. “We are considering all of our legal options to keep our communities safe.”

The state Health Department did not return an email seeking comment Tuesday about Hurd’s ruling. State figures show more than 80% of state residents over the age of 18 have received at least one shot of the coronavirus vaccine.