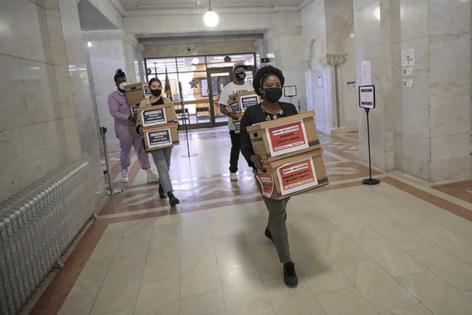 MINNEAPOLIS — A question determining the future of Minneapolis policing has effectively been tossed from the November ballot, after a judge ruled Tuesday that officials couldn't use the latest phrasing or tabulate votes on the proposal.

But that's unlikely to end the legal saga, with an almost certain emergency appeal to the Minnesota Supreme Court.

"The Court finds that the New Ballot Question does not ensure that voters are able to understand the essential purpose of the proposed amendment," Anderson wrote. "It is unreasonable and misleading."

Terrance W. Moore, an attorney for Yes 4 Minneapolis, the group that wrote the proposal, said they "respectfully disagree" with the judge's order, and an attorney for the city said they were "focused on a speedy appellate process."

Anderson's ruling came just three days before early voting is set to begin in the first municipal races since George Floyd was killed by police. The proposal has become a central issue in the election and is drawing national attention and money.

The case hinges on how to write a neutral ballot question for a proposal that could clear the way for city officials to replace the Minneapolis Police Department with a new public safety agency.

The measure changes the Minneapolis charter by removing the requirement to keep a Police Department with a minimum number of officers. It then requires the city to create a new agency providing "a comprehensive public health approach to safety."

For more than a month now, city leaders have been embroiled in political and legal fights over how to interpret those charter changes — and what that means for constructing a neutral ballot question.

The latest challenge was brought by three Minneapolis residents — businessman Bruce Dachis, nonprofit CEO Sondra Samuels and former City Council Member Don Samuels — who argued the current version of the ballot question was misleading. Their attorneys also painted a dire picture of what would happen if officials failed to create a plan for the new agency in the 30 days before the change took effect.