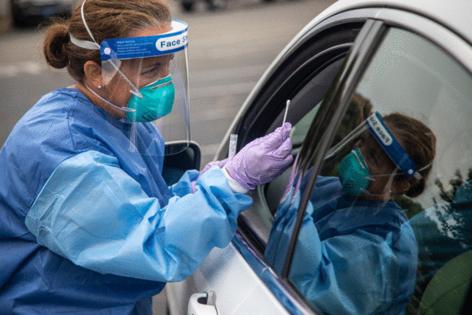 The U.S. may not have enough tests to keep pace with the Biden administration’s tightened workplace COVID-19 mitigation measures.

Under regulation expected in the coming weeks, companies with 100 or more employees will need to require that workers get vaccinated or undergo weekly testing. That could represent nearly double the volume of tests currently being processed, and may make already hard-to-find rapid tests more scarce and lengthen wait times in lines and for results.

Some 81 million Americans worked at firms with 100 or more employees as of early 2020, according to the U.S. Bureau of Labor Statistics. If about a quarter of that population remains unvaccinated, as many as 20 million individuals could require weekly screenings — a rate of nearly 3 million tests per day. By contrast, about 10 million Americans were tested each week, on average, over the last month, data compiled by Bloomberg show.

The Biden administration announced last week that the Department of Labor’s Occupational Safety and Health Administration would soon implement the emergency regulation, and those who do not comply could face fines of up to $14,000 for each violation. It also earmarked $2 billion for 280 million rapid tests for use in community sites like schools and food banks, and said the Defense Production Act will be used to build out testing manufacturing capabilities.

Part of the problem is that test manufacturers haven’t kept up with a recent jump in demand.

In the spring and early summer months, demand for tests waned as vaccinations took off and COVID-19 appeared to be retreating in the U.S. But between the delta surge and reopenings of workplaces and schools, testing volume is increasing again.

The Biden administration’s move is part of a broader attempt to get to vaccine holdouts, and an official said the weekly tests are a key mitigation step for those staffers who aren’t fully immunized. For companies with concerns about weekly testing for employees, the easy solution is to get staff inoculated, the official said.

White House Press Secretary Jen Psaki said at a Friday briefing that the administration has made efforts to meet increased testing demand, and pointed to the recent investments, including the rapid test purchase and earlier funding for school and community testing in the American Rescue Plan.