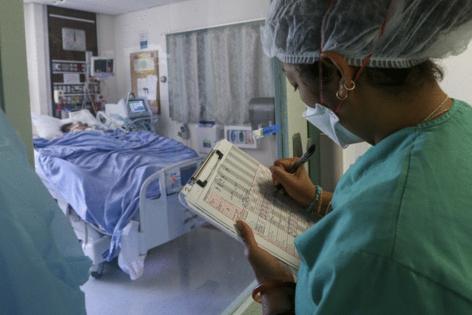 The U.S. government plans to more directly control where COVID-19 antibody treatments are sent amid a surge in infections and hospitalizations in states with large pockets of unvaccinated people.

Hospitals and other care providers will no longer be able to directly order monoclonal antibody therapies from distributors, according to a Sept. 13 update posted on the Department of Health and Human Services website.

Instead, the U.S. government will determine what quantity of the drugs to ship to each state and territory based on COVID-19 case numbers and use of the treatments locally. State health departments will then determine how to distribute the antibody therapies to hospitals and other sites, according to the HHS update.

A rise in infections caused by the delta variant “has caused a substantial surge in the utilization of monoclonal antibody (mAb) drugs, particularly in areas of the country with low vaccination rates,” HHS said on its website. The agency said it is “committed to helping ensure consistent availability of these critical drugs for current and future patients in all geographic areas of the country.”

Many parts of the country with low vaccination rates are relying on antibody therapies to try to keep patients out of strained hospitals. The treatments were cleared by the Food and Drug Administration under the same emergency authorization process used to review COVID-19 vaccines, but have been embraced by people who balked at the rapid clearance of the shots.

Under the new distribution mechanism, the largest shipments will be sent to Florida, Texas, Georgia and Mississippi this week, according to data provided in the government announcement.

The U.S. will deliver 18% of its allocation of therapies through next Tuesday to Florida, and 13% to Texas. Meanwhile, more than 30 states and territories will each respectively receive less than 1% of the overarching supply. Vermont, where vaccination rates are high and cases are low, will be allocated less than 0.1%.

For patients, finding monoclonal antibodies remains difficult in many parts of the country, which the change in distribution may only compound, said Diana Berrent, an advocate who has worked on distributing the therapies.

The federal model was used to distribute antibody therapies, including ones made by Regeneron Pharmaceuticals Inc. and Eli Lilly & Co., earlier in the pandemic. But the government shifted to allow care providers to order the treatments directly from distributor AmerisourceBergen Corp.

A spokeswoman for Eli Lilly said the drugmaker “continues to work with governments globally to help address the therapeutic needs of patients during the COVID-19 pandemic.”

Representatives for HHS and Regeneron didn’t immediately respond to a request for comment.

Unvaccinated people have about five times higher risk of contracting COVID-19 and more than 10 times the risk of getting hospitalized and risk of dying, according to a CDC study released last week.