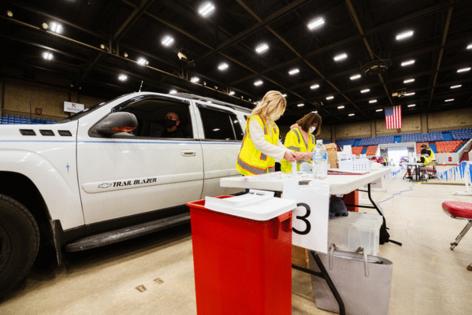 LEXINGTON, Ky. — Kentucky confirmed 4,030 new cases of COVID-19 on Tuesday, 29% of which are in teens and children ages 18 and younger, according to the state Department for Public Health.

As hospitals across Kentucky buckle under an untenable influx of coronavirus patients and public health officials scramble to try and compel holdouts to get vaccinated — roughly 59% of residents have gotten at least one shot — there’s heightened focus on monoclonal antibody treatment. It’s a form of therapy offered to some people recently diagnosed with the virus to help stave off severe infection that might otherwise land them in the hospital.

But a surge in nationwide demand has led to a shortage of monoclonal antibodies. On Tuesday the Biden administration took over distribution of the treatment, likely limiting the quantity allotted to some states in the south with an especially soaring demand.

That means “the federal government is going to have only a specific amount for Kentucky,” Gov. Andy Beshear said in a video update. He told people not to avoid taking the vaccine and assume this form of therapy will be available to them if they test positive. Instead, just take the vaccine, which is not in short supply.

“What this ought to tell you is if you’re unvaccinated and you get really sick, not only might there not be a bed in a hospital because they’re so full,” Beshear said, “but that monoclonal antibody treatment might not be there for you. That thing you’re counting on might not be available. What is available are these vaccines.”

Nationwide, Kentucky ranks second only to Tennessee, which holds the top slot, for its daily rate of new cases per capita, according to a New York Times database that tracks coronavirus metrics across the country. Over the last seven days, Kentucky has averaged 118 new coronavirus cases per 100,000 people. Four of the top 10 counties nationwide — 8 out of the top 20 — reporting the highest number of new cases per capita are in Kentucky.

Per the Centers for Disease Control and Prevention’s guidelines, based on Kentucky’s level of community spread, universal masking is recommended in all public indoor spaces in the state, including school settings. Currently the commonwealth does not allow the statewide enforcement of masking, but individual districts can choose to require it.

As of Tuesday afternoon, 58% of the state’s 171 districts had announced they would continue requiring masks once the state Kentucky Board of Education order mandating the same expires, according to the Louisville Courier Journal. Teenagers ages 12 to 17 are the least vaccinated age group in the state, with only 45% having received their first dose.

The rate of people testing positive, a seven-day rolling average, dropped from 13.70% on Monday to 13.45% Tuesday.

Earlier in the day, the governor issued yet another plea in a tweet for people to “have that tough conversation and encourage others to get vaccinated. Mask up indoors. We need everyone to use our two greatest tools — vaccines and masks — to protect our people.”