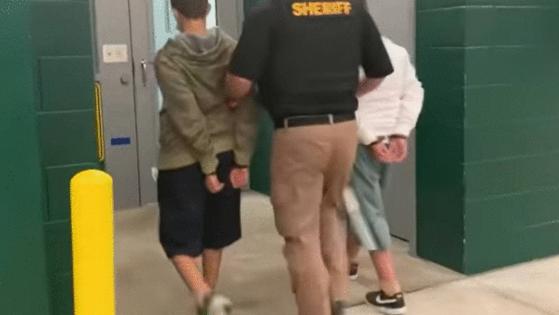 On Sunday, Pembroke Pines police were tipped off by Silver Trail Middle School staff that a Snapchat conversation among three of its students included threatening messages.

By Monday, the three students — two boys and a girl, all 12 years old — were arrested and each face a second-degree felony charge of making a written threat to do bodily harm or commit an act of terrorism. The girl also faces a charge of conspiracy to commit a criminal offense.

Earlier, on Sept. 9, Lee County deputies arrested two boys from Harns Marsh Middle School, ages 13 and 14, and charged them with conspiracy to commit a mass shooting at their school.

Credit a student and an eighth-grade teacher for speaking up, reported Fox 35 in Orlando. According to the Lee County Sheriff’s Office, a Harns Marsh student in Lehigh Acres told the teacher about another student who might have a gun in his bag.

School administrators and a deputy searched the student and bag and did not find a gun, but they did find a map of the school with the locations of all the school’s interior cameras clearly delineated, WINK News reported.

The Miami Herald is not naming the students who were charged because they are minors.

According to a news conference posted to its Facebook page, Lee County Sheriff Carmine Marceno said the teens had studied the 1999 Columbine High School shooting incident and its two shooters. They also researched how to construct pipe bombs and how to purchase firearms on the black market.

“This could have been the next Parkland massacre but we stopped them in the planning stages,” Marceno said at the conference and praised the teacher, the school resource officer and administration for acting to avert a tragedy.

“Our kids will be safe. We will act on every tip,” Marceno said.

He also said that a search of the students’ homes turned up guns and knives.

Marceno added that the teens had become “well known to deputies” because law enforcement officers had been to their homes “more than 80 times.”

At the media conference, Ken Savage, superintendent of the Lee County school district, said “students were safe at all times” because of the “quick action by staff to prevent crimes. Response training made a difference in the outcome of this incident.”

On Sept. 8, a 14-year-old Broward teen was arrested on a charge of making threats. Investigators said the teen lost a game of Fortnite and posted threats on YouTube that he was going to shoot up St. Brendan Catholic School in West Miami-Dade.

On Aug. 23, four days after the 2021-22 school year started, Pembroke Pines police were tipped that two students had threatened a shooting at Charles W. Flanagan High School. Two days later, two boys — ages 15 and 16 — were arrested after police say they made threats to “terrorize” the school on Instagram.