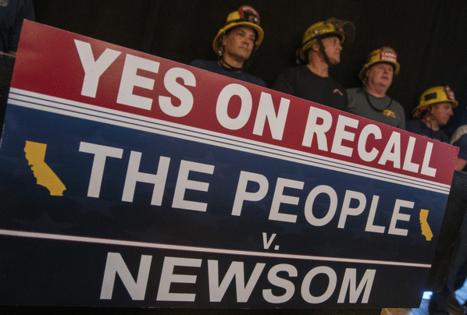 LOS ANGELES — California has always been on a fast track to the future. Let other Western states slowly come into focus, the 31st arrived fully formed on the merits of gold and the thousands of immigrants who pursued it.

Their dream was simple, difficult and commonly shared. They wanted to discover the happiness that economic security affords. Some succeeded; many more did not. But the lessons of that engagement have endured.

When 1.6 million voters signed a petition to recall Gov. Gavin Newsom, they signaled their indebtedness not just to century-old political reforms but also to a spirit of restless reinvention that took root 170 years ago.

"Californians," said historian H.W. Brands with the University of Texas at Austin, "have learned to be impatient with patience. The idea of sticking to an unsatisfactory status quo doesn't stick."

Taking risks was the quickest path to success and evidence of failure was reason to move on and try again, an impulse that has cut a deep channel in the California psyche. Evidence can be found in today's recall election, said Brands, author of a history of the Gold Rush.

"If you don't like this governor," he said, "don't wait until the end of his term. Throw him out."

As voters cast their ballots, some may sense that the reason for the recall effort has less to do with the governor's performance than a broader dissatisfaction with 10 years of Jerry Brown's and Newsom's administrations.

With Democratic supermajorities in Sacramento and a Democratic governor, those voters might have felt slightly removed from the partisan rancor dividing other states, but the last five months — with a $276 million projected expense and 46 candidates making their case — have spoiled that illusion.

Filter out the static and a bipartisan picture emerges of an electorate struggling to address the most challenging issues California has had to face. Climate change and catastrophic wildfires, a housing crisis and a homelessness crisis, income inequality and racial inequities have reached a point where any proposal that doesn't lead to a fix is reason to mobilize.

"Much of everyday life seems at risk," cultural historian D.J. Waldie said, "and Californians are not accustomed to being fearful of the future."