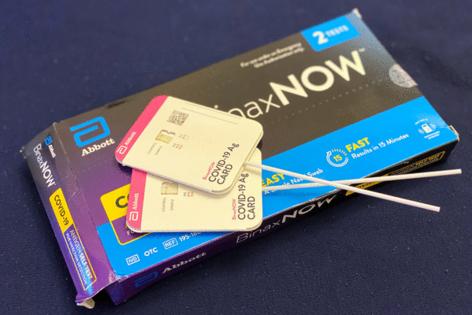 Rapid at-home COVID-19 tests are flying off store shelves across the nation and are largely sold out online as the delta variant complicates a return to school, work and travel routines.

But at $10 or $15 a test, the price is still far too high for regular use by anyone but the wealthy. A family with two school-age children might need to spend $500 or more a month to try to keep their family — and others — safe.

For Americans looking for swift answers, the cheapest over-the-counter COVID-19 test is the Abbott Laboratories BinaxNOW two-pack for $23.99. Close behind are Quidel’s QuickVue tests, at $15 a pop. Yet supplies are dwindling. After a surge in demand, CVS is limiting the number of tests people can buy, and Amazon and Walgreen’s website were sold out as of Friday afternoon.

President Joe Biden said Thursday he would invoke the Defense Production Act to make 280 million rapid COVID-19 tests available. The administration struck a deal with Walmart, Amazon and Kroger for them to sell tests for “up to 35 percent less” than current retail prices for three months. For those on Medicaid, the at-home tests will be fully covered, Biden said.

An increased supply should help to lower prices. As schools open and much of the country languishes without pandemic-related restrictions, epidemiologists say widespread rapid-test screening — along with vaccination and mask-wearing — is critical to controlling the delta variant’s spread. Yet shortages, little competition and sticky high prices mean routine rapid testing remains out of reach for most Americans, even if prices drop 35%.

Consumers elsewhere have much cheaper — or free — options. In Germany, grocery stores are selling rapid COVID-19 tests for under $1 per test. In India, they’re about $3.50. The United Kingdom provides 14 tests per person free of charge. Canada is doling out free rapid tests to businesses.

Michael Mina, assistant professor of epidemiology at Harvard University, lauded Biden’s announcement on Twitter while saying he “had some reservations” about its scale and noted that 280 million tests represent “less than one test per person over the course of a year.”

Rep. Kim Schrier, D-Wash., for months has advocated for rapid testing at a lower cost. “In an ideal world, a test would either be free or cost less than a dollar so that people could take one a few times a week to every day,” she said in the days before Biden’s announcement.

Biden’s initiative “is a great start” for broader rapid testing, Schrier said Friday. “But there is a lot more to be done, and that must be done quickly, to use this really important tool to combat this virus.”

A nationwide survey released in February by the Harvard T.H. Chan School of Public Health and Hart Research found that 79% of adults would regularly test themselves at home if rapid tests cost a dollar. But only a third would do so if the cost was $25.