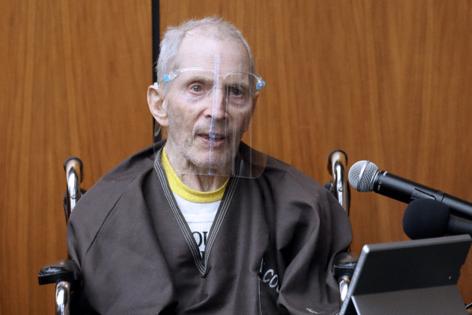 LOS ANGELES — Lawyers for Robert Durst, a real estate heir charged with silencing his best friend with a bullet to the back of her head, argued to a jury that prosecutors had failed to prove a point essential to their case: that Durst had killed his wife four decades ago, the alleged crime to which Durst's friend was believed to be a witness.

Los Angeles County prosecutors have made the case that Durst killed his best friend, Susan Berman, because she had helped cover up the death of his wife, Kathie Durst, who vanished in 1982 and has never been seen since. After Kathie was killed, Berman impersonated her in a call to the medical school that she was attending, telling a dean she was too ill to go to class, according to the prosecution's theory.

Two decades later, when authorities revived the investigation into his wife's disappearance, Durst killed Berman to keep her from telling the police what she knew, prosecutors say. They have charged Durst with murdering Berman, 55, in her Benedict Canyon home with a single shot to the back of the head. The 78-year-old also faces special circumstance allegations of killing a witness and lying in wait.

Durst's lawyers, Dick DeGuerin and David Chesnoff, argued last week and Monday that the premise on which the prosecution's case rests — that Durst killed his wife — wasn't supported by the months of testimony and other evidence shown to the jury.

Berman, Chesnoff said, was "a witness to nothing."

The prosecution, Chesnoff said, has asked the jury to elide the gaps in its case, to "make leaps and inferences" and piece together the disjointed fragments of aging memories and gory photographs to arrive at a guilty verdict.

"It's just, 'Throw it against the wall, and something will stick,'" he said. "But that doesn't count in a trial, not in California, not in the United States of America."

DeGuerin acknowledged that Durst's treatment of his wife, whom he physically and emotionally abused, was "atrocious." DeGuerin also conceded that Durst was made to look "really bad" on the witness stand, from which he was cross-examined for nine days.

It was clear from Durst's testimony, his lawyer said, that his "compass don't point north. He's unusual."

But dislike, even hatred for him, or the impression that he lied on the witness stand, "doesn't substitute for evidence … that he killed Susan Berman," DeGuerin said.

On the witness stand, Durst said he flew to California for a planned "staycation" with Berman in December 2000. When he let himself into her house, using a key she had loaned him, he found her body and panicked, he testified. Unable to call the police using Berman's landline, Durst said, he wrote a note to the Beverly Hills Police Department, telling them of a "cadaver" at Berman's address.

Shortly before her death, Durst, whose family owns some of Manhattan's most iconic and valuable buildings, had sent Berman two checks totaling $50,000. Prosecutors implied that Berman, having grown destitute near the end of her life, was leveraging a last asset — her knowledge of Kathie's death and the coverup she arranged — to lean on Durst for money.

Chesnoff said the checks were merely gifts to help a friend who was broke. "What murderer gives his victim $50,000 and then tells the police where to find the body?" he asked.

Chesnoff conceded that the defense couldn't explain every mystery in his client's curious life. But "we don't have to prove Bob's innocence," he said. "We have no burden. They" — and he pointed to the prosecutors sitting behind him — "do."

The prosecution is allowed to have the last word before the jury begins deliberating. Deputy Dist. Atty. John Lewin on Monday began his argument to rebut Chesnoff's and DeGuerin's statements. The jury is expected to get the case at noon Tuesday.