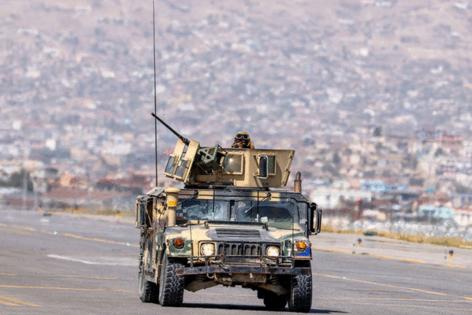 LONDON — After al-Qaida attacked the twin towers in New York 20 years ago, the U.S., Europe, China, Russia and even Iran rallied around a rare common cause: To topple a Taliban regime in Kabul that had made Afghanistan a base for international terrorism.

Now that unlikely group of geopolitical rivals find their interests aligned once more, only this time to see those same Taliban leaders restore order in a nation of 38 million whose economic collapse could trigger destabilizing humanitarian and refugee crises.

In the weeks since Kabul fell to Taliban fighters on Aug. 16, world leaders one after another have called for international cooperation even as they jockey to gain influence in the great power vacuum that the U.S. departure has left behind.

That’s in large part because they face a common dilemma: How to shore up a nation at risk of famine, without strengthening a Taliban government that includes designated terrorists and whose intentions – from the treatment of foreign citizens and women, to its support for al-Qaida – remain unclear or worse, unpalatable.

French President Emmanuel Macron said his country would do “everything we can to help Russia, the United States and Europe to cooperate effectively, because we share the same interests” in deterring irregular migration and terrorism.

France, together with Germany, is now proposing an European Union-led platform for some of Afghanistan’s neighbors to coordinate a response, according to a document seen by Bloomberg last week. The plan suggests inviting international organizations, as well as countries such as the U.S., Norway and Turkey to help finance the effort, and to give “special thought’’ to including China and Russia.

The U.S. and other nations have leverage they can use to try to press the Taliban to share power, sideline terrorists, permit the education of women and forgo revenge against those who worked and fought alongside the U.S. and its allies. That includes the potential withholding diplomatic recognition, as well as economic sanctions.

Yet if those tools are used, they could starve the country of the funds and humanitarian support needed to stave off collapse. Foreign aid accounted for 43% of the Afghan economy in 2020, according to the World Bank. The country remains among the world’s poorest, with gross domestic product per capita of just $509 in the same year.

“The conundrum this leaves the world with is how to first deal with the humanitarian crisis that is looming,’’ says Adnan Mazarei, a consultant to the United Nations Development Program in Afghanistan, who oversaw the International Monetary Fund’s work there from 2009 to 2015.

The benefits of a COVID-19 vaccine for young children made by Pfizer Inc. and BioNTech SE exceed its risks, according to a panel of U.S. experts, putting a shot for the youngest school-age children on track for a likely ...Read More

NEW YORK — One of the officers who wrestled Eric Garner to the ground during his fatal 2014 arrest testified Tuesday to falsely charging the Staten Island man with a felony after riding with his lifeless body in an ...Read More

Investigators seeking Brian Laundrie as a “person of interest” in his girlfriend’s strangulation murder mistook his mother for the 23-year-old man while surveilling his parents’ house, they acknowledged Monday.

WASHINGTON — Two Miami lawmakers joined a bipartisan group demanding answers from the National Institute of Allergy and Infectious Diseases after an advocacy group revealed that taxpayer funds paid for research that ...Read More

WASHINGTON — Almost two months after the U.S. withdrew all of its troops, the State Department is in touch with hundreds of Americans who want to leave Afghanistan, the Pentagon’s top policy official said Tuesday.