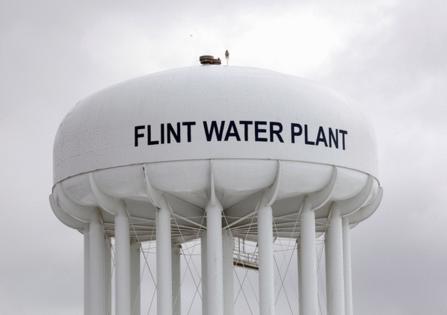 LANSING, Mich. — Thousands of Flint residents were put at potential risk because a New York law firm, for six months, used handheld X-ray devices to scan their bones for lead without first registering the devices and putting recommended safety measures in place, documents obtained by the Free Press show.

Starting in about August 2020, the Napoli Shkolnik firm used the portable scanners — which are tools in the mining and scrap metal industries but are not designed for use on humans — as a way of bolstering residents' claims for larger shares of a proposed $641.25-million settlement of civil lawsuits arising from the 2014 lead poisoning of Flint's drinking water supply.

The law firm's failure until February 2021 to register the devices with the state of Michigan, as required by law, and the state's low-key response once it learned the scanners had been used for months without required approvals, add insult to the injury that was the Flint drinking water crisis.

"It turns out that the violations and safety concerns were valid and even went beyond what many of us suspected and feared."

The state of Michigan did not know the law firm was using the portable scanners on Flint residents — or any other human beings — when it granted registrations for two of the devices on Feb. 25.

After the Michigan Occupational Safety and Health Administration found out, in early March, it conducted a March 23 inspection and ordered certain changes to protect workers, such as requiring them to wear radiation monitors attached to their fingers or wrists, and requiring a supervisor to monitor workers and their radiation exposure.

In his May 4 inspection report, MIOSHA physicist supervisor John Ferris also said he was "considering" additional measures to protect Flint residents, including supervision of the scanning by a medical doctor, advance notice to residents of the radiation doses they were expected to receive, and modifications to the scanners, including an automatic shutoff switch to prevent excess radiation exposure. By then, at least one of the devices had been in use for close to seven months and thousands of Flint residents had received three-minute scans to their tibias, in the lower leg. Ferris gave the law firm until May 30 to comply with the ordered changes related to workers and to comment on the proposed requirements related to public health and safety. The law firm agreed to all the proposed safety improvements in a May 12 letter to the state, but it appears the law firm had already completed all scanning operations by that time.

Failing to register a radiation machine is a misdemeanor under the Public Health Code that can bring a $10,000 fine and up to 180 days in jail, with each day that a violation continues considered a separate violation. But the state brought no criminal or civil charges against the law firm, records show.

At no point did the state order the law firm to stop using the scanners until the state was satisfied its ordered and recommended changes to ensure safety at scanning operations inside a Flint office building had been implemented. Instead, it was the manufacturer of the devices who ordered Napoli Shkolnik to stop using the scanners on humans, in a May 12 letter, the Free Press reported in June.

A lawyer from the office of Attorney General Dana Nessel, Assistant Attorney General Margaret Bettenhausen, told U.S. District Judge Judith Levy at a July hearing that MIOSHA had only called for "several minor changes to procedures," including "some signage issues" after its inspection of the Flint bone-scanning operations. Given what the report actually says, that was misleading and an attempted "whitewash" of what was going on, said Mark Cuker, a Philadelphia attorney representing objectors to the settlement.

Jason Moon, a spokesman for the Department of Labor and Economic Opportunity, which includes MIOSHA, said the law firm apparently was not aware it was supposed to register the radiation devices with the state. The agency prefers to work with registrants to ensure compliance, rather than prosecute them, he said.

"There was no indication from MIOSHA’s inspections that an individual operating these machines or having the machine used on them was exposed to radiation at dangerous or unsafe levels," Moon said.

"Persons registering new devices must select what they consider to be the appropriate use category for the machine, and they are not required to indicate that a machine will be used on humans."

MIOSHA ordered the radiation detectors for workers because that was required under an existing rule, he said. The agency only recommended and sought comment on proposed requirements to protect Flint residents because the "novel" use of the equipment meant there were no applicable rules already in place, Moon said.

"When it became aware of the use of these particular machines, MIOSHA took steps to ensure it acted promptly and in a manner consistent with its prior regulation of X-ray machines," Moon said. "The novel nature of the use of the machines caused MIOSHA to be deliberate in its review and inspections, which explains why the process was ongoing for several months."

Paul Napoli, a partner in the law firm, has insisted the amount of radiation emitted by the scanners is low and their use on humans is safe after they underwent modifications under the supervision of medical experts from Harvard and New York University.

In a June 25 follow-up letter to the law firm, Ferris said state officials agree "the estimated radiation risk from this procedure is very low." However, Ferris said the law firm understated the amount of radiation exposure in some information submitted to the state. The amount of radiation concentrated on a small area of skin over the tibia during the procedure is 48.5 mSv (millisieverts) and "the rules were written with the understanding that individuals undergoing X-ray procedures that result in a dose to any part of their body more than 1 mSv would do so under the supervision of a physician," Ferris said.

The law firm was using a different measure of radiation exposure, total effective dose equivalent, which is not relevant to the state regulations, Ferris said.

Moon said state officials do not believe the law firm was trying to mislead the state about how much radiation was emitted, but was not clear about which measure was the appropriate one to use under state regulations.

Napoli said in a Wednesday email that issues related to the bone scans were "addressed by various highly-qualified and regarded experts," and "the safety and accuracy of this technology is unquestioned."

The law firm has "met all the requirements of the department regarding safety," and that was reaffirmed recently by state officials, who signed off on the changes the law firm agreed to make, he said.

"Those challenging the use of these devices for the case are misguided and unwittingly doing a disservice to the community," Napoli said.

Napoli would not say how many bone scans were performed or when the last one was performed. "Sorry, that information is proprietary," he said.

Blood tests showing high lead readings are another way to qualify for higher shares of the proposed settlement. But since lead only stays in the blood for a short time, many Flint residents have only the bone scan option to document their exposure. Stationary bone scan equipment, designed for humans, exists, but nowhere near Flint.

Cuker, who has objected to Napoli's control of the bone-scanning process in a way that Cuker says has primarily benefited Napoli's clients and contingency fees, said Wednesday he is surprised and disappointed the state has allowed Napoli's firm to conduct the scanning in the way it has, given that a major cause of the Flint water crisis was the state's lack of proper oversight of the city of Flint's switch to the Flint River as its drinking water source.

The MIOSHA report confirms that Flint residents who went for bone scans — who included at least one pregnant woman — were given consent forms that made no mention of the fact the procedure would expose them to radiation, Cuker said.

"It's really outrageous that the state, rather than working proactively to go fix the problem, is just whitewashing it and sweeping it under the rug," Cuker said.

Lynsey Mukomel, a spokeswoman for Nessel, said she believes Levy is "fully informed" about issues surrounding the portable X-ray scanners. We "are not concerned that our attorneys have made any representations that may have misled the court," she said.

It was not the state, but the manufacturer of the devices, who ordered Napoli Shkolnik to stop using the scanners on humans, in a May 12 letter.

“The safety instructions contained in the … User’s Guide explicitly instruct all users to ‘(n)ever point your analyzer at yourself or anyone else when the shutter is open,’” Thermo Fisher Scientific Vice President and General Manager Chloe Hansen-Toone said in the letter to Napoli Shkolnik.

“All users are expected to abide by the safety instructions, except under specific circumstances (not present here) that require adequate assurances regarding safety.”

Flint resident Nadine Roberts, a retired teacher, said Wednesday she took her granddaughter to the law firm's offices for a bone scan on March 7 and was struck by the large number of Flint residents waiting outside the door to get scanned and how the operation did not look like a medical facility. There were no signs advising people of the use of radiation equipment, she said.

"They were just herding people through," said Roberts, a client of Cuker's.

The state's conduct and lack of enforcement with respect to the bone scans is "completely unacceptable," she said.

"You're already in litigation, and now all of a sudden, in order to determine who gets how much money, you have to take this bone test at this particular facility."