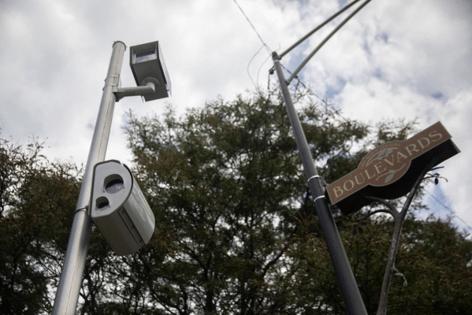 CHICAGO – Across the street from a car wash, next to a fenced-off former lumber yard stands one of Chicago’s most prolific park safety speed cameras.

And two blocks west on Lawrence Avenue, on the other side of a railway viaduct, sits the small park the camera is ostensibly protecting from speeding cars.

Until last March, that camera and more than 100 like it around the city could ticket drivers going at least 10 mph over the limit. But after Mayor Lori Lightfoot dropped the threshold to 6 mph over in March, the Lawrence Avenue speed monitor — and lots of others — got mighty busy issuing the $35 tickets.

In March and April, that single location west of Cicero Avenue in the Northwest Side Jefferson Park neighborhood resulted in more than 12,300 tickets for speeding 6 to 10 mph above the 25 mph park zone speed limit, according to a Tribune analysis of the ticket data for those months.

One of the drivers affected was Julind Agalliu. The 22-year-old Ravenswood resident tallied three $35 tickets within a five-day period in March, and before the month was over was dinged again for $35 by a camera a few miles away. In three of the four cases, he was caught going 6 mph over the limit.

“The cameras, where they put them, it felt very sneaky, very predatory in a way,” Agalliu said. “… It’s like an extra hidden tax for being a Chicago resident.”

Whatever drivers think of the new rules — which Lightfoot said she enacted to keep pedestrians, cyclists and motorists safe — the numbers suggest the change will be a big windfall for the city, at the expense of speeding drivers.

In all, cameras across Chicago issued 322,447 of the $35 tickets during the first two months, which will bring in $11.3 million to city coffers if violators pay all the fines.

That’s a nearly 17-fold increase over those same months in 2019, when the city was only hitting drivers with $35 citations for going exactly 10 mph over the limit, and 19,480 such tickets were issued. Drivers caught on camera at higher speeds receive $100 tickets.

Within five minutes of the lower standard taking effect at 6 a.m. on March 1, the cameras had caught and ticketed nine drivers going 6 to 10 mph over the limit.