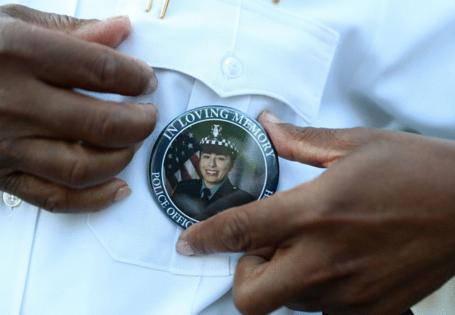 On the night Chicago police Officer Ella French was shot to death and her partner badly wounded, the two were working on a roving team tasked with patrolling areas around the city prone to spikes in violence and other crime.

French, her partner and a third officer were working what is known as the community safety team. It was a Saturday night in the South Side’s West Englewood neighborhood, historically a part of the city that sees more than its share of shootings.

When they stopped an SUV, its driver ran from them and his brother struggled with French and her partner before allegedly shooting both in the head.

Chicago police Superintendent David Brown and other top brass have relied on the community safety team to try to quell stubborn violence in the city over the last year.

Some less experienced officers have been sent to the team when there simply weren’t enough volunteers, finding themselves working in districts they aren’t used to. Brown and the team have also faced criticism in a lawsuit for allegedly using quotas to increase police activity where the community safety team patrols.

A community safety team roster from January of this year shows that among the 822 police officers then tasked to it, 373 had start dates with the department just in the prior four years, a Tribune review found. Some 225 had start dates in the year 2018 alone, the same year French became an officer.

Dennis Kenney, a professor at the John Jay College of Criminal Justice in New York City, said it’s not necessarily surprising that younger cops or those with less experience would be part of such a team. Younger officers can be more assertive and aggressive than older ones, he said, and can gain experience fast.

“The military encounters the same thing,” he said. “There’s a reason why they (recruit) 18-year-olds and not 35-year-olds.”

Still, Kenney said, “experience matters.” Cops with more time on the street “tend to be more measured in the actions that they take. More cautious. A little less easily excited.”