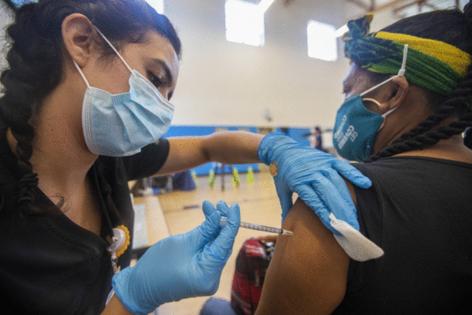 LOS ANGELES – California has seen a substantial increase in the number of people getting vaccinated against COVID-19 over the last two weeks, a turnabout that comes as a growing list of municipalities, businesses and venues are moving to require the shots for employees and, in some cases, even customers in hopes of slowing the latest surge.

The recent boost is a promising development after weeks of rising coronavirus cases and hospitalizations fueled by the highly infectious delta variant of the virus — a tide officials say can eventually be turned if significant numbers of unvaccinated people roll up their sleeves.

Amid this new surge in infections and illness, a growing number of both public and private sector employers are moving toward mandating their workers be vaccinated.

Two Los Angeles County supervisors on Tuesday proposed a vaccine verification requirement for more than 100,000 government workers, a day after health giant Kaiser Permanente announced it was making vaccines mandatory for all employees and physicians, as nearly a quarter of its 240,000 employees remain uninoculated.

More retailers and restaurants are also beginning to require customers to provide proof of their inoculation status.

Whether because of a forthcoming mandate, fears over the delta variant or other reasons, California's vaccination pace has increased of late after months of decline.

From July 25 to 31, providers throughout California administered an average of nearly 44,000 first vaccine doses per day, according to data compiled by The Times.

That's up notably from the previous week, when an average of about 37,300 first doses were doled out daily; and a 41% increase from two weeks ago, when the average was just under 31,100.

These figures cover both those who received their initial dose of the Pfizer-BioNTech or Moderna vaccine or the single-shot Johnson & Johnson vaccine.

California's vaccination pace still lags far behind its springtime peak, however. Over the week of April 4 to 10, for example, providers were administering roughly 251,000 first doses per day, on average.

LOS ANGELES — The Los Angeles Police Department has seen a dramatic increase in the use of dispersal orders as officials deal with rising numbers of intense street protests over police violence, homelessness, COVID-19 ...Read More

TALLAHASSEE, Fla. — Gov. Ron DeSantis on Tuesday “encouraged” state law enforcement officers to pull over drivers who are transporting migrants into the state if there is “reasonable” suspicion of a crime, as an ...Read More

Female students won’t return to Kabul University until “a real Islamic environment” is provided for all, the Taliban-appointed chancellor said this week, dealing another blow to women’s rights in Afghanistan since ...Read More

New York City traffic is close to reaching prepandemic levels as more people commute into the city through the bridges and tunnels run by the Port Authority of New York and New Jersey.

PHILADELPHIA — A Bucks County gym owner who recorded herself during the storming of the Capitol saying she was looking for Speaker Nancy Pelosi “to shoot her in the friggin’ brain” pleaded guilty to a federal ...Read More