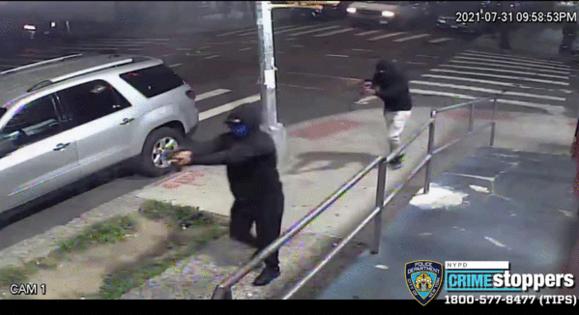 “Right here in this community, you had a well-organized, total disregard for human life,” Adams said at a news conference at 98th Street and 37th Avenue in North Corona, Queens, paces away from the scene of a shooting in which 10 people were wounded Saturday.

“The people who were shot here were not members of gangs, for the most part. They were ordinary New Yorkers,” he continued. “That is a mass shooting.”

On Saturday night, gunmen fired off more than 40 shots down a North Corona street. The bullets struck a group hanging out by a barbershop, people celebrating a birthday and innocent bystanders — what NYPD Chief of Detectives James Essig called a “brazen, coordinated attack.”

During a weekend of carnage, 18 people were either killed or wounded in seven separate shootings including the one in North Corona, according to police.

Shortly after winning the Democratic mayoral primary in June, Adams pitched his idea of a task force against gangs and guns to the White House. Modeled on the NYPD’s Joint-Terrorism Task Force, the effort would feature information and resource sharing for gun investigations, among other steps.

President Joe Biden has been pushing to increase funding for police in cities across the country that have been seeing a surge in violent crime.

“If you allow gangs to get a foothold in this city, we have a real problem. This is a crisis,” Adams said Sunday. “I’m also calling for Congress to fully fund community violence intervention at the federal level with President Biden’s gun violence initiative and agenda.”

Adams, who campaigned on a tough-on-crime platform, also called for a new special prosecutor to handle gun cases and for more funding for the city’s Crisis Management System and the NYPD’s Gun Suppression Division.

He previously promised to bring back the NYPD’s controversial plainclothes anti-crime units, with an emphasis on cracking down on guns, if he’s elected in the November general election. He’s expected to easily win in overwhelmingly Democratic New York City.

“We have to go after the crews. It’s a small number of shooters and gangs that we are allowing ... to continue,” Adams said. “We need to have precision policing in neighborhoods like this, to go after those known shooters.”

“It is so resembling the Wild West atmosphere we have in the city of New York,” said Sliwa, founder of the controversial volunteer crimefighting group the Guardian Angels.

He called for a crackdown on the city’s gang members and hiring of more cops. Sliwa also promised that members of his group would patrol the area, saying, “We’re going to make sure [the shooters] get arrested.”