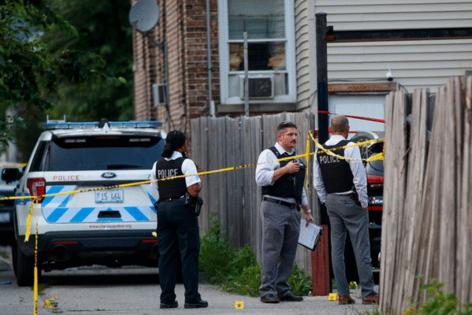 CHICAGO — Twenty-two people were shot Saturday night into early Sunday, with three of those people dying from their injuries, according to Chicago police.

One of those homicides came on Saturday, which meant it counted in July month-end statistics released by Chicago police Sunday. It was the second year in a row with more than 100 homicides during the month. July 2021 saw 105 homicides, while July 2020 saw 107.

In contrast, there were 44 homicides in July 2019 and 64 in July 2018. The Police Department said more than 90% of this July’s homicides were the result of gun violence.

The Saturday homicide happened in the West Pullman neighborhood, during a shooting that also left two others injured. Police were called to the 11600 block of South Peoria Street about 10:15 p.m. and found the three shooting victims, who had been standing near a group of people having an argument when shots were fired, according to a police media notification.

A 28-year-old man was shot in the face and chest, and he was taken to Roseland Hospital, where he was pronounced dead. He had not been identified by the Cook County medical examiner’s office as of Sunday.

Another man, 31, was shot in the chest, and he was listed in serious condition at Stroger Hospital. A woman, 33, was shot in the hand and she was taken to Advocate Christ Medical Center in Oak Lawn, where her condition was stabilized.

Also Saturday night, two people were in critical condition after they were shot in the 2600 block of West Gladys Avenue around 9:15 p.m. by someone in a red sedan, police said. A man, 28, suffered multiple gunshot wounds, and he was taken to Stroger Hospital in critical condition and a 28-year-old woman suffered similar wounds and was in the same condition at Mount Sinai Hospital.

At 9:23 p.m., in the 6400 block of South King Drive, two men were shot by someone who came up to them on foot and opened fire. A 35-year-old man was shot in the right shoulder and a 36-year-old man was shot in the buttocks. They were dropped off at St. Bernard Hospital and the University of Chicago Medical Center, respectively, and both had been listed in fair condition, police said.

The number of shootings and the number of victims are up so far this year, according to the month-end statistics.