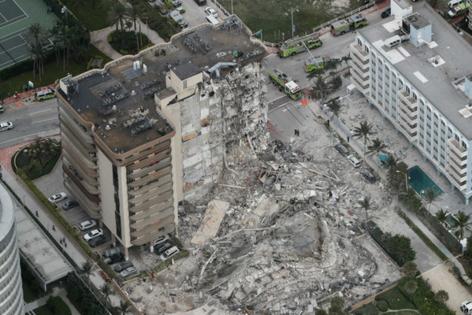 While that project did not suffer the same tragic fate as the Surfside collapse, it did not end well for the investors or for the dozens of buyers who soon found themselves in foreclosure.

Reiber spent the latter part of his career as a partner in a business that was brought down by bankruptcy, foreclosure and accusations of underhanded financial dealing.

The South Florida Sun Sentinel looked at Reiber’s corporate registrations, official records in Broward and Palm Beach counties, civil court filings and newspaper archives to determine whether Reiber, who died in 2014, developed any buildings in the two counties.

The investigation found no evidence that Reiber, who moved to Miami Beach in the 1970s and became immersed in business and civic life there for most of his remaining days, was involved in any construction projects in Broward or Palm Beach counties.

William M. Friedman, the architect of record for Reiber’s three Champlain Towers projects, is credited in local newspaper archives as designing just a handful of low-rise buildings, mostly apartment houses, during the 1960s and 1970s. Several of those have already been replaced by newer structures.

Reiber’s stint as a high-rise developer in the mid-1980s seemed to be short-lived. Before and after he completed his tower projects, records show that he made his living primarily as a real estate investor. Along the way, he had many partners.

In he early 1970s, he formed partnerships with other Canadian businessmen to buy apartment buildings in Miami-Dade County. South Florida was enjoying one of its many real estate booms, and the partners believed rising rent prices would deliver healthy profits. To complete the transactions, they formed companies with names like Damir Holdings, Irber Holdings, Citron Estates (after partner Max Citron) and Reiber Estates.

Eventually, Reiber formed or was a principal in 30 Florida companies, according to the state’s Division of Corporations online database.