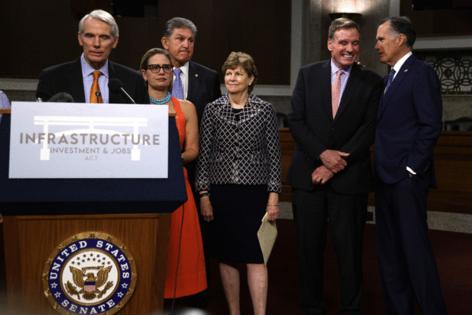 WASHINGTON — Key U.S. senators said text of the bipartisan infrastructure bill would be ready by Sunday night, and that a final vote should be secured later this week.

Lawmakers met Saturday to iron out the language of the bill, and meetings are expected to resume Sunday afternoon and continue until a deal is reached.

Work on the plan has already blown through several deadlines, including a self-imposed Friday afternoon goal, as lawmakers grapple over issues related to transit and broadband access.

The text of the bill would be ready “by this evening,” and lawmakers would finish it up by Thursday, West Virginia Sen. Joe Manchin, a Democrat, said on CNN’s “State of the Union.”

“We have got the text done now. Basically, it’s just drafting right now,” Manchin said. “When you talk about roads and bridges and rails and train and everything that goes with it, and internet services, it’s something that every state, every area of every state, needs.”

A large part of the text has already been shared with Senate offices, said Sen. Susan Collins of Maine, a Republican who, also on CNN, echoed Manchin’s hope that the bill would be passed by the end of the week.

Manchin and Collins are among the lawmakers negotiating the bipartisan bill.

The legislation marks the biggest infusion of U.S. federal spending on infrastructure in decades, including $110 billion in new spending for roads and bridges, $73 billion of electric grid upgrades, $66 billion for rail and Amtrak, and $65 billion for broadband expansion. It also provides $55 billion for clean drinking water and $39 billion for transit.

The package was led by the White House and a bipartisan group of senators including Democrat Kyrsten Sinema of Arizona and Republican Rob Portman of Ohio.

Passage of the bill will set the stage for later consideration of President Joe Biden’s $3.5 trillion economic plan, but a potential showdown looms: House Speaker Nancy Pelosi has said that she won’t hold a vote on the infrastructure bill unless the Senate also passes the larger reconciliation package.

That larger plan, which includes investments in child care, education and paid leave, would require all the Democrat votes in the Senate, where the parties have a 50-50 split and a tie-breaker in Vice President Kamala Harris.

Manchin said he couldn’t guarantee that the reconciliation package would pass the Senate, adding that he was concerned generally about the U.S. level of debt and inflation. The Congressional Budget Office forecast a near-record $3 trillion budget gap this year, close to the 2020 record, and many measures of inflation have been rising.

Sinema, a fellow moderate Democrat, has voiced concern about the size of the plan, saying that $3.5 trillion is too large for her to support.

“We need a reconciliation bill if we want this bipartisan bill to pass,” progressive Rep. Alexandria Ocasio-Cortez said on CNN, responding to Manchin’s comments.

“If the Senate does not pass the reconciliation bill, we will uphold our end of the bargain and not pass the bipartisan bill until we get all of these investments in.”

The New York Democrat said a “very large amount” of the progressive caucus agreed with her.