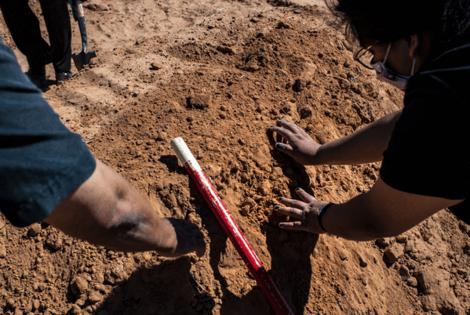 Curtis Zunigha remembers shedding tears when he heard the age of one Native American whose remains were part of a reburial ceremony in Ohio several years ago.

It was a girl, 11 when she died. Her young age, which reminded Zunigha of his granddaughter, along with the girl’s inclusion among the many Indigenous people throughout U.S. history who experienced indignities such as being moved from their homelands, left him shaken.

“I was emotionally distressed,” he said during a recent telephone interview.

Zunigha, cultural director of the Delaware Tribe of Indians, said the experience illustrates the long-lasting effects of the country’s history and the ongoing importance of the Native American Graves Protection and Repatriation Act, or NAGPRA, which was passed in 1990. The law mandates institutions receiving federal funding must return Native American remains and cultural items to tribes and Native Hawaiian organizations.

The Delaware Tribe of Indians expects the remains of nearly 200 ancestors to be reburied at the Pennsbury Manor near Philadelphia in the fall and thousands of belongings to be returned.

Nationally, there are almost 200,000 human remains of Native Americans that have been identified under the law, according to the National Parks Service. Remains have been uncovered in all 50 states and are now on display in museums, in university labs for anthropology research and tucked away in boxes in the back of closets across the country.

The Department of the Interior in July announced new proposed regulations for the protection and repatriation law to clarify the process as well as take the burden off tribes to initiate and complete the required steps. The federal government is consulting tribes and Native Hawaiian organizations about the new proposals and will open them for public comment in October.

The Delaware tribe has been working for years to bring its ancestors back home.

The remains of possibly hundreds of ancestors of the tribe, known as the Lenape people, were removed from their graves at the Abbott Farm Complex in New Jersey in the 19th and 20th centuries.

“We get buried in the ground, and our spirit carries on,” Zunigha said. “And in many ways, we like to stay right there — in an area where we’ve always been in.”