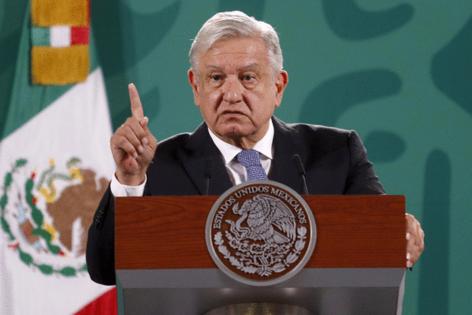 MEXICO CITY — Should former Mexican presidents be prosecuted for alleged crimes committed while in office?

It’s a query of considerable political and moral gravity in a country where de facto impunity has long shielded politicians, especially former chiefs of state, from facing justice for corruption and other misconduct.

Even before a single vote has been cast, the exercise has devolved into a polemical shouting match between the president and his detractors.

Lopez Obrador calls the vote a moral imperative. His critics call it a performative act of political theater and score-settling.

Moreover, the question facing the electorate is cloaked in so many ambiguities that it’s unclear what effect the vote will ultimately have.

Lopez Obrador has long championed the referendum — technically a consulta, or consultation — casting it as a transcendent moment of people power.

“The people must always have the reins of power in their hands,” Lopez Obrador told reporters Friday. “It’s very important that people realize that being in a representative democracy doesn’t mean that you only participate every three or every six years.”

Few disagree. But his opponents see the vote as a self-righteous ploy meant to exact revenge on longtime political adversaries and deflect attention from Lopez Obrador’s many deficiencies: botching the pandemic response, failing to curb spiraling crime and overseeing a lackluster economy.

Former President Vicente Fox has called the vote a “farce” and urged people not to participate.