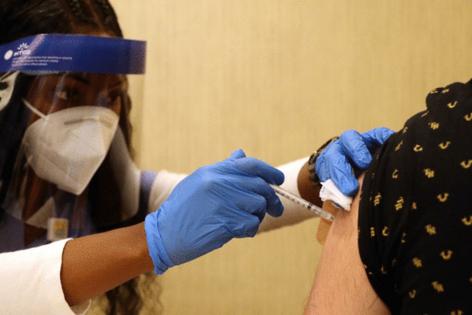 FORT LAUDERDALE, Fla. — Hospitals in Broward and Miami-Dade counties admitted the most COVID-19 patients of any counties in the U.S. in the last seven days, with more than 800 patients each, according to a White House report.

—Memorial Healthcare System set up triage tents outside its Emergency Departments and is using conference space to care for patients.

—The two counties’ children’s hospitals are triaging a crunch of patients in their emergency rooms and admitting the most critically ill children with COVID. In July alone, more than 30% more children per day have been treated in Nicklaus Children’s Hospital’s emergency department than during the summer of 2019, before the pandemic began.

—Cleveland Clinic Florida, which also has seen COVID-19 patient numbers increase, planned a vaccine clinic Saturday at its Weston campus from 9 a.m. to 5 p.m. in an attempt to curtail the tide of patients flooding in.

“We have seen a 200% increase in hospitalized COVID patients in the last month and a 400% increase in the last two months,” said Dr. Scott Ross, chief medical officer at Cleveland Clinic Weston. “Last night, we put a 19-year-old who was unvaccinated on life support.”

Broward health care workers say they are emotionally and physically exhausted, and watching younger unvaccinated and formerly healthy people express regret as they are put on ventilators.

“In the last five days, the numbers started skyrocketing,” said Dr. Sunil Kumar, medical director of the intensive care for Broward General Medical Center in Fort Lauderdale. “It’s so sad because it’s preventable. As patients come into my care they are asking for vaccines and I tell them it’s too late for that.”

On Friday, local hospital leaders began pleading for people to get vaccinated, saying delta is more aggressive than the original strain. A new CDC report calls the delta strain of coronavirus “as contagious as chickenpox.”

At a news briefing Friday, Dr. Aharon Sareli, chief of critical care medicine for Memorial Healthcare System, said patients are flooding into emergency rooms and intensive care units quicker than during the two previous waves in Florida — and 98% of them are unvaccinated. Memorial has half of its 200 ventilators in use and has asked the state for more.

“We’ve seen a four-fold rise in COVID patients in the last month and the numbers grow every day,” Sareli said. Of 400 patients, more than 96% are unvaccinated. “We are asking everyone to get vaccinated. Vaccines are not bulletproof, but those who do get infected tend not to be critically ill. This is a preventable loss of life.”

Sareli said only one patient of the 55 now in the ICU is vaccinated.

A teary-eyed Mejia at Memorial Hospital Miramar, spoke out too, saying she is working seven days a week and has witnessed COVID-19’s toll on the unvaccinated who are no longer older with underlying health conditions.

“I have never experienced anything of this magnitude,” she said. “I’ve seen so many lives lost. We have lost husbands and wives, brothers and sisters and young people, as young as 20. In the ICU, we’re the ones right in front of them, and when we get personal with them, we cry.”

Broward General’s Kumar said he expects the visible surge in cases to continue for at least another month, or two. He said he urges residents to wear masks and get vaccinated, noting that Miami-Dade’s and Broward’s low vaccination rate is the reason local counties are leading the country in COVID cases and hospitalizations.

“There’s no doubt in my mind that delta is more contagious and more dangerous,” he said.

Health care workers’ pleas come as the daily COVID-19 case counts across Florida surge to numbers not seen since the height of the pandemic in January. The large daily case count — 17,093 new cases on Thursday — has led to long lines at test sites, curtailed visitor hours at crowded hospitals and ramped-up mask restrictions in government facilities and businesses.

Jennifer Smith, a spokesman for Broward Health, said along with COVID-19 patients, Broward Health has seen an increase in people with other serious illnesses exacerbated by delaying medical care.

Florida’s children also are being affected. At this time, only children 12 and older can get vaccinated, leaving younger kids vulnerable as the aggressive delta spreads in communities. Pfizer is studying the use of its vaccine in children 5 to 11.

Joe DiMaggio Children’s Hospital in Hollywood has admitted seven children with COVID-19 — two are in intensive care. However, the hospital also is seeing an uptick in children arriving at the Emergency Department with COVID symptoms but not sick enough to be admitted. In June, 36 children were seen in the Emergency Department, and thus far in July, 190 have been treated, a hospital spokeswoman said.

Broward Health and its Salah Foundation Children’s Hospital have seven children admitted, including a 15-year-old on a ventilator, Kumar said.

Nicklaus Children’s Hospital in Miami has admitted 17 children and six are in intensive care. One is on a ventilator. The children range from 15 months to 19 years old — all unvaccinated.

Mestre said he expects COVID cases and hospitalizations to rise further in the next few weeks. “I am pleading with parents of children 12 and older to get them vaccinated now — even though it’s already the eleventh hour.”