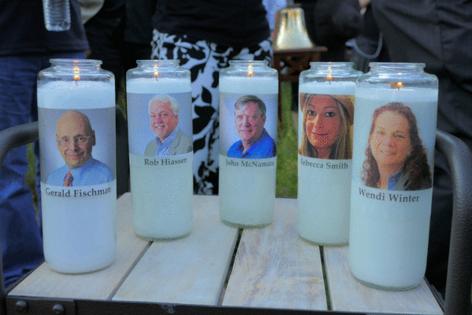 ANNAPOLIS, Md. — After 12 days of a traumatizing trial to determine whether the Capital Gazette gunman was responsible for killing five people in the Annapolis newsroom, the jurors made their swift decision: yes, his actions and statements made it clear he was sane and should be punished for the murders.

“He knew exactly what he was doing that day,” said juror Tim Smith, 62.

Smith, three other jurors and three alternates discussed the case with a reporter in a two-hour meeting at an Severn church. A volunteer crisis counselor was on hand as they talked about hearing the wrenching testimony of the survivors and remembering the unsettling thoughts of the killer. Some spoke under the condition of anonymity, citing concerns of privacy, safety or the sensitive topic.

Gerald Fischman, Rob Hiaasen, John McNamara, Rebecca Smith and Wendi Winters were killed June 28, 2018. While Jarrod Ramos pleaded guilty to all the crimes associated with the mass shooting, he maintained he was not criminally responsible, leading to the Anne Arundel County Circuit Court trial to determine his sanity.

It took the panel less than two hours on July 15 to decide Ramos was criminally responsible, and with that, the jurors’ role in the trial was over.

But the jurors and alternates face an enduring emotional toll in the aftermath of a grueling trial. In the group interview Monday, several described not only how they reached their verdict, but that they suffered from a constant awareness of the implications it could have on the victims’ families, as well as the future of the defendant.

The jurors said they decided the case based on the facts. While few doubted he was mentally ill, what was impossible for the defense to overcome were the things Ramos did and said.

No matter how compelling his attorneys’ narrative about his mental state was, they never met the burden of proving his conditions prevented him from understanding his actions were criminally wrong or being able to stop himself, according to Smith, the three other jurors at the group interview and another juror interviewed separately.

Ramos mailed letters claiming responsibility the morning of the massacre. He blasted into the newspaper’s office and calmly carried out his years-old plan. He called 911 to surrender. He hid under a desk, disguising himself like a survivor to avoid getting hurt. He complied with officers’ commands during his arrest and eight hours of interrogation.

Juror Jason Copeland, 47, was swayed by that evidence, which was presented early in the trial.

“You’ve proved that the leverage of (fear of) dying is so great that you’ve got the mental capacity to fake being a victim, or you really want to see the wrath of your actions and you know both,” Copeland said. “That itself proved to me that I don’t need to see any more evidence, I don’t need to talk about it.”

Jurors began their deliberations in an otherwise empty courtroom, surrounded by hundreds of pieces of evidence, scattered about tables previously occupied by the lawyers in the case. A podium with a computer for the attorneys to display evidence was disconnected from the internet and available for viewing videos and pictures.

Members of the jury pulled chairs into a circle between the jury box, the judge’s bench and the witness stand; because of coronavirus precautions, the trial courtroom became, briefly, their deliberation room.

It was the first opportunity to talk about what went on in the courtroom, what they had wanted to talk about for weeks with the only people who could understand.

“There was so much going on during the trial that, you know, it was agonizing not to be able to sit down with your fellow jurors and discuss it as it was going on,” said juror Kurtis Swope, 49. “So, we all just kind of had to bottle that up inside and wait for that moment.”

As soon as they walked in, Copeland said he suggested taking a poll to gauge each of their positions. While Copeland said he knew which way he would vote, some jurors wanted time to review evidence.

A juror who requested anonymity said she took another look at an FBI replica of the newsroom, which survivors of the shooting used during their testimony to show where they hid and where their co-workers were murdered.

“Even though most, if not all, of us went into the room having an idea of how we were going to vote, I think, kind of going through and doing due diligence and making sure that there was nothing to question,” she said, describing her need to review evidence.

She looked at photos and read from the report of Dr. Sameer Patel, a state health department psychiatrist who evaluated Ramos and testified he was criminally responsible.

The juror quickly realized she didn’t want to keep reading. The pages contained chilling details, some of which Patel testified to: How Ramos rejoiced about finding his last victim and made a cruel joke before executing him. How the gunman’s only regret was not having claimed more casualties, naming some of the survivors he was disappointed to have missed.

By the time Patel testified, jurors had heard two weeks of details about Ramos’ thinking.

“It’s disturbing,” said another juror who wished to remain anonymous. “You’re living inside the mind of a killer and it’s not a pleasant thing.”

During closing arguments, defense attorneys tried to impugn Patel, saying he acted more like a stenographer during his approximately 20 hours with Ramos than a forensic psychiatrist. They argued he became emotional on the stand as he described some of the most haunting details from the conversations, and claimed that made him unprofessional.

But the group of jurors and alternates said they found Ramos’ remarks to Patel to be among the most telling pieces of evidence. If they hadn’t decided already, Patel’s testimony sealed it.

Early during the trial, Ramos’ attorneys showed video of the shooting and his eight-hour police interrogation.

“The key evidence came directly from Jarrod Ramos: The things he wrote leading up to it, the planning, watching his behavior that day,” Swope said. “It was almost impossible to go from any of those other things to ‘not criminally responsible.’”

Doctors testifying on Ramos’ behalf talked about Ramos’ childhood, isolated life and grudge against the paper, which they described as evidence of his obsessions, delusions and insanity. They hardly discussed the crime itself, though Ramos went over it in detail and bragged about his actions with Patel.

Jurors were tasked with deciding the case based on Ramos’ mental state at the time of the crime. Considering the footage, photos and his statements to Patel, it wasn’t a hard decision.

“If there was a degree of criminal responsibility, what we saw was 100%,” Swope said. “I don’t know that you could be more criminally responsible.”

Multiple jurors said the case could have ended when the defense rested its case. But it didn’t. And the prosecution’s case included some things some of the jurors described as difficult to forget.

The six survivors testified where they hid — under desks, between filing cabinets — and the sounds — reloading, explosions, last breaths — and what it was like seeing a laser attached to the gunman’s tactical shotgun flashing by. Two testified to escaping, one as a shotgun blast breezed past his head. All said they thought they were going to die.

“Their testimony was heartbreaking,” Smith said. “You know, the ones that were there, that didn’t get killed, and to see the reactions on the faces of the families. It was horrible and I continue to this day to think about it.”

State’s Attorney Anne Colt Leitess said in an interview this week that she considered the effect of graphic evidence and tough testimony and held back some things. But she believed the emotional element of the case was critical: jurors needed to hear what it was like to be in that newsroom.

“Nobody would know that the laser sights were pointed on different people or different things unless the survivors testified about it,” she said.

After the verdict, the jurors filed out into a corridor where people affected by the shooting had gathered. Some jurors embraced family members. Swope said he wanted to do the same, but changed his mind when he saw another juror shake hands with a survivor.

“I had to get out of there,” Swope said, “because I was going to lose it.”

Jurors left quietly to try to make sense of the last three weeks — and how less than two hours of deliberations hardly answered all the questions they had for each other.

One of the jurors who wished to remain anonymous turned on the television news that evening. She watched coverage of the verdict and said she took some comfort from hearing the families describe some sense of closure.

“I feel the exact opposite,” she said. “I’m so happy that we were able to provide that closure to them and they feel better because of the decision we made. That’s awesome. But to me, this is a brand-new, open wound.”

Smith, who woke up shortly after midnight every night during the trial, then lay awake until morning with everything he’d heard the day before replaying in his mind, took the day after the verdict off from work for his mental health. So did another juror.

By chance, they crossed paths at the Guardians of the First Amendment Memorial near City Dock in Annapolis, its five granite pillars recognizing the lives stolen by the man they’d just effectively sent to prison.

They thought it would bring them some closure, but Smith said the case weighs on him. Others who were in the jury box agreed.