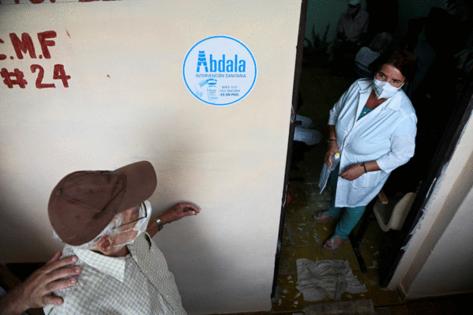 Over the past month, the daily number of COVID-19 cases in Cuba has tripled to 9,323, a record since the start of the pandemic. Deaths from the virus, which had averaged around 10 per day between April and June, spiked to 20 in early July and steadily rose to 68 on Thursday.

The record was set the same day that Cuba announced it had vaccinated nearly 2.4 million people with three doses of its Soberana and Abdala homegrown shots, as public health officials accelerated an inoculation campaign that had been delayed by supply issues and lengthy clinical trials amid an unprecedented economic crisis.

“We are getting to the end of July in very bad shape,” Dr. Francisco Duran, national director of epidemiology, said in a video conference on Friday. “We don’t see a reduction in cases and we lament the deaths of so many in our country.”

The government bet on a locally produced vaccine instead of seeking to buy shots developed in other countries earlier on when they became available. Local health officials are now in a race against time as the more contagious delta variant rips through the island of 11 million, Duran said.

More than half of all cases occurred in the province of Matanzas, the epicenter of Cuba’s pandemic, where the popular beach resort of Varadero reopened to tourism late last year, which likely increased transmission. With hospitals stretched to the limit, the provincial government had to set up makeshift clinics at schools. COVID-19 patients who should have been isolated were allowed to stay at home and even at the hotels where they worked due to a lack of hospital beds, increasing the risk of contagion. The government reimposed strict measures including curfews in some resort areas.

How did the island reach this point after being lauded as a public health success case for keeping transmission extremely low during 2020?

Some observers say Cuba probably reopened too soon and had trouble getting its vaccination campaign off the ground.

“Last year was brutal for Cuba, with the economy dropping 11%, remittances drying up and the shutdown of tourism,” said Jorge Duany, director of the Cuban Research Institute at Florida International University. “It probably was under pressure to reopen even though the vaccination schedule kept getting delayed.”

Cuba imposed strict lockdown measures in March 2020 and closed its borders to tourism even when that meant cutting an essential source of revenue. The socialist government said that its public health system launched a monitoring effort that closely tracked the health of Cubans and conducted contact tracing. Passengers on the few flights allowed to land on the island had to be quarantined at state-appointed hotels.

But in November, probably under pressure from hotel operators, Cuba slowly began reopening its borders. It allowed flights from Russia, Turkey and Canada to Havana, where passengers were tested for COVID-19 upon arrival and had to wait for the results at hotels before being allowed to tour the city.

Soon planes were landing in Varadero and at a regional airport serving Cayo Santa Maria, another hot tourist spot in Villa Clara province. Some health measures were still in place, like tourists not being allowed to leave their resorts.

World Health Organization data show that Cuba maintained a grip on transmissions until late March, when daily cases were still below 1,000. By mid-May, cases began rising steadily, just when the number of flights were also increasing. Russia and Canada, for instance, added flights to Varadero and other destinations on the island in May.

Then, in June, cases spiked from 1,057 on the first day of the month to 3,008 on June 30. That was likely when the delta variant began circulating in Cuba, according to Duran.

Even as the island was rushing to develop five COVID-19 vaccine candidates, the shots were still not ready for mass inoculation at that point.

Cuba opted to develop and produce a homegrown vaccine against the deadly virus, a challenging test for a biotech industry that has suffered from a lack of investment and difficulties posed by the tightening of the U.S. embargo in recent years.

As trials lingered on and rollout plans kept getting delayed, the government in May announced a “sanitary intervention” due to rising cases and began vaccinating people with the Abdala and the Soberana 02 vaccines, the candidates that were further along in late-stage clinical trials, even before they got official approval.