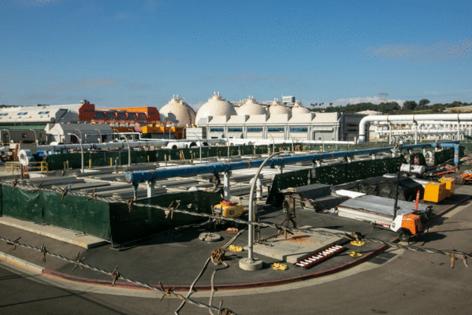 LOS ANGELES — More than two weeks after a flood of raw sewage inundated the Hyperion Water Reclamation Plant and triggered a massive discharge into Santa Monica Bay, the damaged facility has continued to release millions of gallons of partially treated wastewater into the Pacific Ocean, in violation of its environmental permit, the Los Angeles Times has learned.

Responding to repeated inquiries from The Times, Los Angeles city sanitation officials confirmed that the facility has violated multiple state and federal water pollution limits since an emergency discharge sent 17 million gallons of raw sewage into the waters off Dockweiler and El Segundo beaches July 11 and 12. The surge of wastewater sent workers fleeing for their lives and has left the plant in a damaged state.

Sanitation officials said in emails that the facility has exceeded levels for solid particles in the wastewater as well as levels for biological oxygen demand and turbidity, or water clarity, all of which are used to measure the degree of organic pollution during the treatment process.

Each day, the plant discharges 260 million gallons of wastewater into the ocean through a five-mile pipe about 12 feet in diameter. State regulators and environmental experts say that because the wastewater is not fully treated, it could harm people and marine life.

“We are very concerned about the potential impacts on Santa Monica Bay,” said Renee Purdy, executive officer of the Los Angeles Regional Water Quality Control Board.

The water board ordered Hyperion officials on Thursday evening to conduct daily offshore testing and provide daily status reports on water quality and equipment repair until the plant can resume normal operations, which sanitation officials say could take weeks. The order corroborates information obtained by The Times and shows that the violations began on July 19 and have continued through Wednesday, when the most recently available testing data was returned.

Residents who live near the plant, as well as environmental experts, say city sanitation officials should have informed the public that the facility has been releasing partially treated wastewater into the ocean.

“We are shocked,” said Katherine Pease, science and policy director for Heal the Bay. “It’s been two weeks since the 17-million-gallon sewage spill, and we are only learning now that the plant is not able to fully treat sewage.”

A spokeswoman for the L.A. Sanitation and Environment Department, which operates the Hyperion plant, said in a statement Friday that the violations were the result of the significant damage caused to the plant by the flooding.