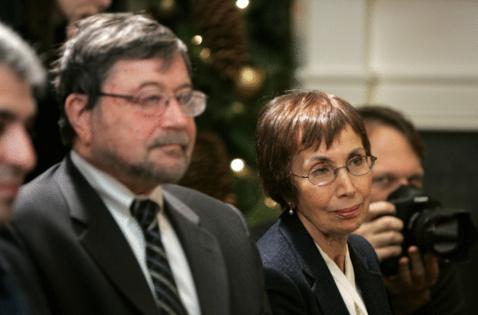 LOS ANGELES — Ruth Pearl, the mother of slain Wall Street Journal reporter Daniel Pearl who turned the profound and lasting agony of losing a son into a life of activism, outreach and bridging cultural divides, has died at her home in Los Angeles.

Pearl, who died July 20, had been suffering from pulmonary difficulties. She was 85.

After their son was kidnapped and murdered by al-Qaida extremists while reporting in Pakistan in 2002, Pearl and her husband Judea worked feverishly to extract good from their son’s violent death by establishing a foundation in his name that offered fellowships to journalists in Muslim countries and hosted lectures, concerts and other events to promote cross-cultural understanding.

But all the while the weight of their son’s unresolved murder and the byzantine Pakistani court system was a constant undertow in their lives. The accused terrorist charged with luring Daniel Pearl to his death and three accomplices were ordered to be released in April , though they remain in captivity while the country’s judicial system grinds on.

In a final plea, Pearl — by now frail with lung disease — and her husband recorded a YouTube video in May, asking the Pakistani courts to reverse their decision. A hearing is set for late August.

“I’m sure the killers of Danny didn’t have a sense of the humanity that connects us,” she explained in an interview with the University of Southern California Shoah Foundation. “For them, Danny was an object, and that can happen only if you don’t have your own self-respect and respect for other human beings.”

Born Eveline Rejwan on Nov. 10, 1935, Ruth grew up in Baghdad in a mixed Jewish and Muslim neighborhood. When she was 6, thousands of Iraqi citizens, emboldened by Nazi propaganda, stormed the streets in an attempted coup that left 200 people dead and an entire swath of the city in fear of what was to come. When she was 15, her family was part of a mass exodus of Jews allowed to leave Iraq if they forfeited their assets and citizenship. The refugees were taken by cargo plane to Israel.

The family moved to Tel Aviv, where she enlisted in the Israeli navy and then earned a degree in electrical engineering at the Technion Israel Institute of Technology, where she met her future husband. They soon moved to New Jersey where she earned a master’s in eigineernig at what then was Neward College of Engineering. She worked in software development after they moved to LA. Her husband was a computer science professor at the University of California, Los Angeles.

One of three children, Daniel was a classically trained musician who made sure to take his violin case when he went off to Stanford to study journalism. He had an innate hunger to understand other cultures, a curiosity that led him to Pakistan and a fateful reporting mission to uncover al-Qaida activities and funding.

He disappeared Jan. 23, 2002, while running down leads on Richard Reid, the al-Qaida operative who tried to blow up a Paris-to-Miami flight with a shoe bomb. Three weeks later, while his parents and his pregnant wife Mariane waited with growing apprehension to hear from him, a video surfaced showing his decapitated body.

The benefits of a COVID-19 vaccine for young children made by Pfizer Inc. and BioNTech SE exceed its risks, according to a panel of U.S. experts, putting a shot for the youngest school-age children on track for a likely ...Read More

NEW YORK — One of the officers who wrestled Eric Garner to the ground during his fatal 2014 arrest testified Tuesday to falsely charging the Staten Island man with a felony after riding with his lifeless body in an ...Read More

Investigators seeking Brian Laundrie as a “person of interest” in his girlfriend’s strangulation murder mistook his mother for the 23-year-old man while surveilling his parents’ house, they acknowledged Monday.

WASHINGTON — Two Miami lawmakers joined a bipartisan group demanding answers from the National Institute of Allergy and Infectious Diseases after an advocacy group revealed that taxpayer funds paid for research that ...Read More

WASHINGTON — Almost two months after the U.S. withdrew all of its troops, the State Department is in touch with hundreds of Americans who want to leave Afghanistan, the Pentagon’s top policy official said Tuesday.