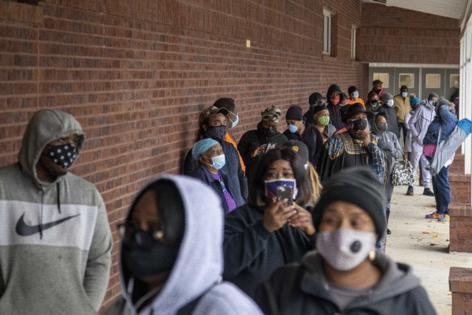 ATLANTA — Georgia Republican lawmakers took a key step Friday in a long and untested process that could trigger an extraordinary takeover of the elections system of one of the state’s biggest Democratic strongholds.

State Rep. Jan Jones and four other House Republican legislators sent a letter Friday demanding a review of Fulton County’s election management, a critical step in Georgia’s new voting law that must take place before the State Election Board can overhaul a county’s election board.

It’s a monthslong process full of legal questions and procedural challenges, but state Republicans have increasingly promoted the idea of a takeover ahead of the 2022 election to energize conservative supporters.

The first step toward a takeover was initiated earlier this week by state Senate Republicans representing Fulton County. Jones, one of the state House’s most powerful lawmakers, and four other GOP members of the Democratic-controlled county delegation triggered the review by echoing their call on Friday.

“We recognize that the performance review may later become the basis for removal of one or more of the local elections officials by the State Elections Board,” they wrote, “but believe this is a critically important step.”

The effort was endorsed Friday by Gov. Brian Kemp, who said through a spokeswoman that the “review process will hopefully provide greater transparency, ensure local accountability and restore voter confidence.”

Long critical of Fulton County’s problem-plagued voting system, Republicans say they are trying to protect voters in Georgia’s most populous county from mismanagement. Democrats see the effort as a brazen hostile takeover by Republicans who have embraced Donald Trump’s false claims of rampant election fraud.

“It is my ultimate fear that this request performance review could be occurring for political reasons and that Fulton County’s voters will be the ones who bear the cost,” wrote Fulton Commission Chairman Robb Pitts to supporters of the review.

Three separate tallies of the roughly 5 million ballots in Georgia upheld Joe Biden’s narrow victory, court challenges by Trump allies were squashed, and state and federal election officials have vouched for the results.

Although Fulton County’s oversight of election has long been a source of ridicule, including the chaotic handling of the 2020 primary, the November presidential election and January Senate runoffs were run more smoothly.

A monitor appointed by state officials to ensure Fulton complied with legal requirements said he saw no evidence of fraud in Fulton during the November vote, but he found examples of disarray and sloppy accounting of ballots.

The new election law, passed over stiff Democratic opposition in April, gave the Republican-controlled Legislature more influence over the state election board. And it permitted the board to replace a county’s election board after a performance review, audit or investigation. That would give a temporary superintendent authority over vote counting, polling places and staffing.

Experts say this is the first time elections restrictions adopted in the wake of the 2020 election cycle is being invoked to lay the groundwork for a partisan takeover of a local election board. But they also stress the process under the new law is lengthy, unpredictable and vulnerable to legal challenges.

While most of the ...Read More