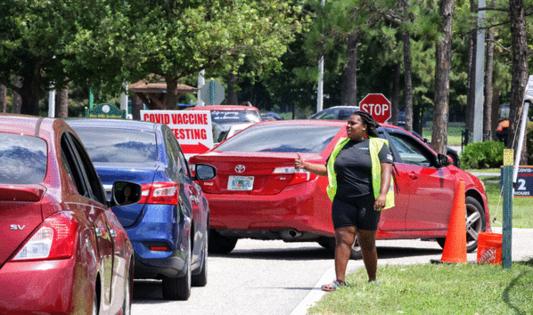 The highly transmissible delta variant is a more formidable foe than previously believed, largely due to its ability to infect and be spread by people who are fully vaccinated, according to data gathered by the Centers for Disease Control and Prevention.

Some of the data in the document was described Tuesday by CDC Director Dr. Rochelle Walensky when she announced new guidance regarding the use of face masks. In parts of the country where coronavirus transmission rates are “substantial” or “high,” everyone — regardless of vaccination status — should wear face coverings when they’re in indoor public spaces, the agency now says.

Scientists have also established that people infected with Delta have about 1,000 times more viral particles in their upper respiratory systems than people who are infected with earlier coronavirus strains.

That difference allows delta to jump from person to person just four days after an initial infection, said Chunhuei Chi, director of the Center for Global Health at Oregon State University. With previous strains, it took about six days for that to occur, he said.

This rapid spread helps explain why the delta variant, which is thought to have arrived in the U.S. in March, now accounts for an estimated 82% of recent coronavirus infections in the United States, according to CDC estimates.

The CDC document suggests that breakthrough cases are expected to rise — not only because of delta's enhanced transmission powers, but because the number of vaccinated people is rising as well.

While most of the ...Read More