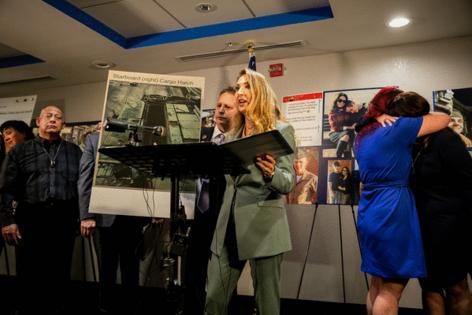 OCEANSIDE, Calif. — The families of the nine service members killed last year when their assault amphibious vehicle sank off the San Diego coast are suing the manufacturer of the vehicles, they said at an emotional news conference Thursday ahead of the one-year anniversary of the tragedy.

The families also demand the Marine Corps modify existing AAVs as well as its replacement, the amphibious combat vehicle, with more effective ways to escape what one of their attorneys called a "death trap" in the event of another sinking.

The Vietnam War-era AAV was designed and manufactured by BAE Systems, the same contractor that was recently awarded a $184 million contract to begin production on its replacement, the new ACV.

"We don't want another AAV going into that water until there's a way out for our servicemen and women," said Eric Dubin, an attorney for the families. "This AAV had a design defect that BAE had known about for a long time — and now the whole world knows about the vulnerability of this vehicle, and that's unacceptable. They were kids, and they were put in a death trap."

A BAE Systems spokesman declined to comment on the pending lawsuit but said the company sympathizes with the families.

"We offer our deepest sympathies to the families impacted by this tragedy and we mourn the loss of the nine service members," said Tim Paynter, a BAE Systems spokesperson, in an email.

On July 30, 2020, 15 Marines and one sailor left the amphibious transport dock Coronado en route to train on San Clemente Island in a 35-year-old AAV that investigators later said was in such poor mechanical condition it should not have been in use.

After training on the island — during which the AAV experienced mechanical issues — the troops rolled off the rocky beach and into the waves to return to their ship. They never made it.

The vehicle's transmission failed, which caused a chain reaction of failures. The water discharge pump inside the vehicle stopped working, and it sat stalled in the open sea for 45 minutes taking on water. When the troops inside couldn't get the rear hatch open, a hatch in the AAV's roof was opened. However, when another AAV came to assist the floundering vehicle, it created a swell that washed over the roof, spilling the sea inside. The vehicle quickly slipped beneath the waves and plunged hundreds of feet to the bottom of the ocean.

Eight Marines and one sailor, ages 18 to 23, died. Seven Marines were rescued.